PiggyBac: A Simple and Easy to Use Tool to Accelerate Development of Cultured Meats and Cell Lines for the Production of Food Proteins

The food industry has seen a revolution in the last few years with the development of alternative animal-free meat proteins for nutritional purposes. The Boston Consulting Group forecasts this market to reach at least a $290 Billion value by 2035, growing to 11% of total protein consumed.

The first wave of development in this nascent industry led by Impossible™ Foods and others, has taken advantage of the meat flavor associated with Heme proteins which, combined with additional microbial and plant proteins, can give a look and a texture similar to that of real meat.

While this first step has seen huge commercial success, the next obvious step is to develop proteins that do not mimic animal or seafood ones but are real animal or seafood proteins, which are produced without the use of any animals.

This exciting new industry might prove Winston Churchill right when almost 100 years ago he predicted that “we shall escape the absurdity of growing a whole chicken in order to eat the breast or wing, by growing these parts separately under a suitable medium”.

Cell Line Engineering is the Future of Cultured Meat

This next wave of progress in human nutrition is upon us with the development of cell lines, which can be cultured in a laboratory to develop foods that are animal based. These cells can be generated, for example, from a cow skin sample obtained with a simple biopsy. Several companies, all around the world, are starting to develop these new cultured meats and seafoods to obtain products that, rather than just looking like the real thing, actually are the real thing.

One of the challenges in this process is to generate cell lines that can be “immortalized” by making them stem cell-like to remove the need for constantly needing more samples. These cells can be manipulated to improve their growth in a laboratory or bioreactor; differentiate into specific tissues such as muscle; and enhance production of certain protein(s) for optimal nutritional composition, appearance and texture.

Evolution of these kinds of cell lines is notoriously slow compared to microbial cells. However, a tool like Demeetra’s hyperactive piggyBac Transposase DNA modification system allows quick improvement of mammalian as well as seafood cell lines in an extremely short time compared to traditional methods (Figure 1).

Figure 1: PiggyBac stable transposition mechanism. DNA “Cargo” including immortalization genes, differentiation factors or genes expressing proteins of interest, are cloned into transposon vector.  Co-transfection of the transposon(s) and transposase mRNA into cells cuts out cargo and pastes into random TTAA sites which can be screened for the desired insert or trait.

PiggyBac can generate stably expressed proteins at a very high efficiency and allows researchers in the alternative food protein space to quickly screen for cells with desired characteristics.  Insertion preference into highly-expressed genomic loci is a unique characteristic of piggyBac that has been utilized with great success in the biopharmaceutical industry for cell immortalization, reprogramming, and differentiation, as well as the production of proteins.  When piggyBac is used for antibody bioproduction, it yields up to more than 11-fold increases in comparison with standard plasmid transfection (Figure 2)1. 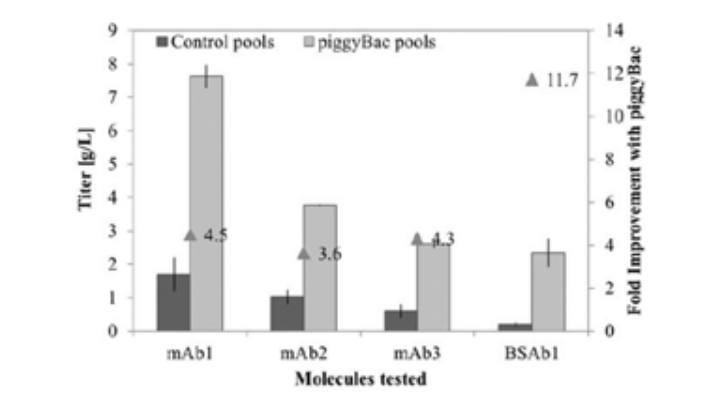 Figure 2: Comparison of the titer yields of 3 different monoclonal antibodies (mAbs) and a bi-specific antibody (BSAb1) when expressed in cell lines without using piggyBac (controls) versus piggyBac.

Meat cells have minimal lifecycles in culture, limiting large scale propagation.  Maintaining proliferating cells without affecting their ability to differentiate into lineages such as muscle, is a critical step in cultured meat production. One way to accomplish this is to introduce a gene that “immortalizes,” or reprograms, cells for unlimited proliferation. PiggyBac is particularly useful for this purpose because it integrates stably at highly expressed sites, thereby enabling large scale propagation without loss as with transient expression.

Another consideration is the DNA cargo capacity for integration of the desired genes. When one group attempted retrovirus-mediated immortalization of mouse embryonic fibroblasts (MEFs), little efficiency was observed due to low viral titers of the large cargo required. When the same group used piggyBac’s massive cargo capacity, they efficiently immortalized mouse MEFs while maintaining multipotency.

As demonstrated in Figure 3a, primary MEFs (top panel a) grew slowly through five passages (P5) but piggyBac immortalized MEFs (piMEFs, lower panel b) grew rapidly and through at least forty passages (fifteen shown, P15). Further, a cell staining assay shows that piMEFs reach confluence on day 3 versus day 7 for primary MEFs and had significantly higher cell numbers measured as optical absorbance at all timepoints (Figure 3b)2. 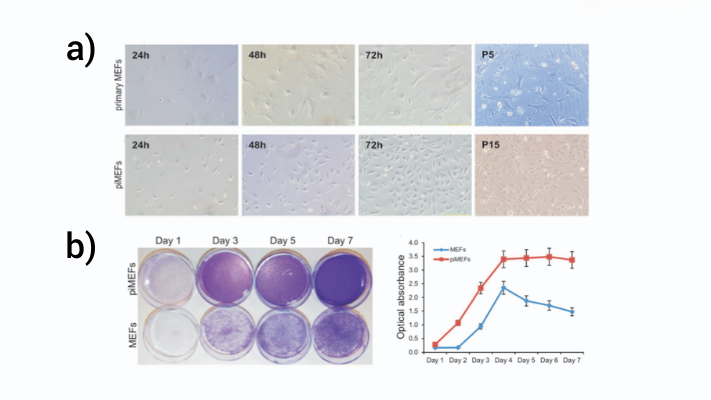 Optionally, following the transposon mediated insertion, the cassette can be removed in a scarless manner with excision-only piggyBac transposase (PBx) as shown below in Figure 4. We call this process Footprint-Free® gene editing. This useful feature of piggyBac can be applied to removing reprogramming or immortalization factors to drive differentiation following proliferation, phenotype reversion and selection marker recycling.

Why Use Demeetra’s Gene Editing Platform?

Understandably, many companies do not want to invest too heavily to establish new basic protocols. So, the final question one might ask is, has it been used in my system or species?

This is where piggyBac excels as it is active in nearly all species and cells tested to date. See piggyBac’s abundant applications and uses below.

In addition to piggyBac, Demeetra’s Cas-CLOVER can be used to generate a more precise deletion/insertion once genomic areas of interest are identified with piggyBac (Figure 5). Cas-CLOVER and piggyBac, can alternatively be used in conjunction to generate footprint free mutants.

When working with our technologies, research teams benefit from faster and safer development of products. If you’d like to discuss licensing and forming a partnership, fill out the form here and we’ll get back to you right away.