This approach can be applied to any pathway in any yeast strain without preconceived knowledge of the target site for homologous recombination.

From industrial biotechnology to agriculture and beyond, the piggyBac system is a versatile tool that is becoming increasingly utilized in a wide variety of fields. Various research activities using piggyBac technology have skyrocketed in the fields of therapeutic bioprocessing.

In particular, researchers have adopted a widespread use of piggyBac with Chinese Hamster Ovary (CHO) cells, which are in turn used for the manufacturing of high value proteins and therapeutics, such as monoclonal antibodies (mAbs).

Demeetra researchers were recently able to demonstrate that the piggyBac platform has the ability to integrate large copy numbers of transgenes in a variety of host organisms, with a nearly unlimited cargo capacity. The piggyBac transposon has a preference to randomly integrate into highly transcribed regions of the genome, making it a very useful tool to develop cell lines and strains that highly express genes of interest.

Let’s take a deeper look into piggyBac, and how its huge genetic cargo delivery can enable efficient metabolic engineering of yeast for the subsequent production of high value metabolites.

To illustrate the efficiency of the piggyBac system in the field of synthetic biology and metabolic engineering, our team sought to engineer a relatively large pathway in Saccharomyces cerevisiae (S. cerevisiae) yeast.

The focus of these proof-of-concept studies was to engineer the yeast mevalonate pathway (MVA) in order to optimize the production of a high value sesquiterpene, called β-Farnesene. Our researchers rationalized that by engineering all of the genes in the yeast pathway on a single cassette, this would end up having a significant value to the synthetic biology field for producing high-value secondary metabolites.

Now let’s review the efficiency of piggyBac and see if β-Farnesene was actually produced after only one transformation.

In this study, our team transformed the entire S. cerevisiae MVA pathway within a single piggyBac cassette, along with a β-Farnesene synthase. In a single transformation of the piggyBac/MVA cassette, we were able to obtain multiple strains with high levels of β-Farnesene production. When these high-producing strains were carried over to a shake flask experiment, the highest titer reached in a given strain was over 1.6 g/L.

Ultimately, these early results show that the piggyBac system has a very robust performance in S. cerevisiae. 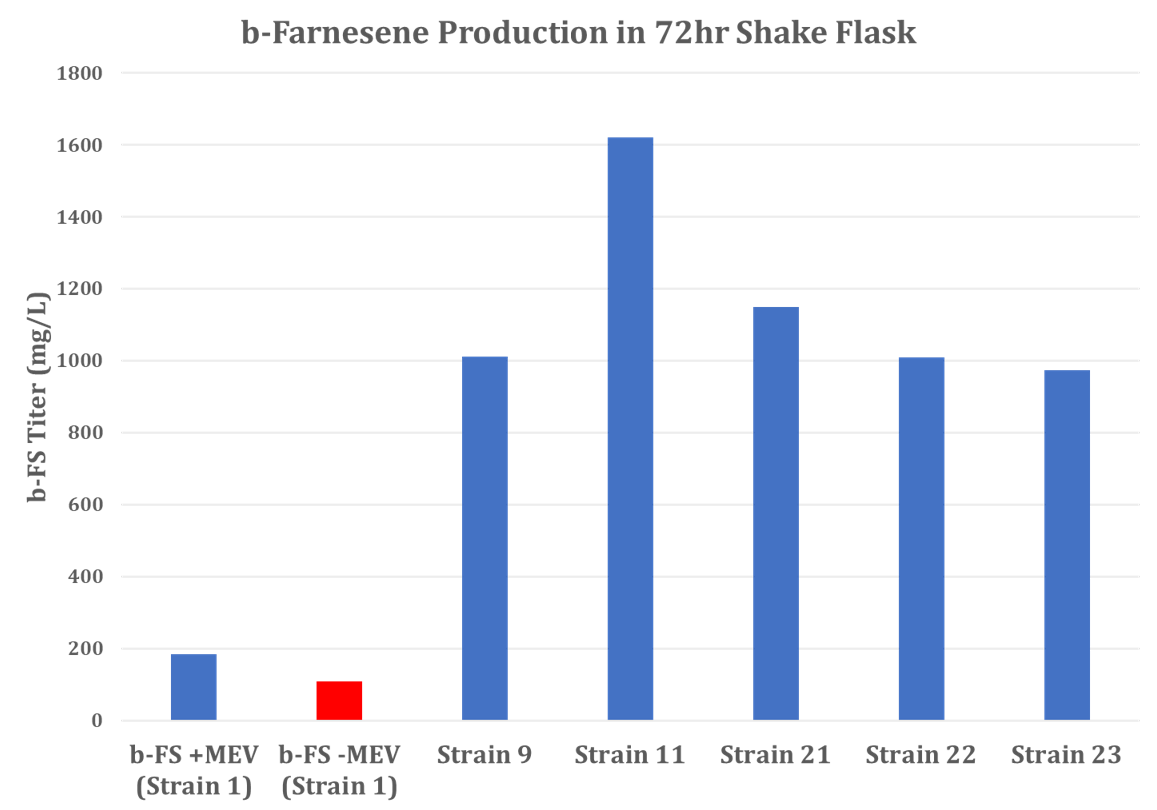 The study results above elucidate the approach to implementing the piggyBac system for improving the production of metabolites in transformed S. cerevisiae. The study results clearly demonstrate that the PiggyBac system has the ability to expedite the screening of multiple commercial strains in a single transformation step, and without any preconceived knowledge of the strain’s genetics or target site sequence – which is a huge plus!

This technology is especially useful in uncharacterized commercial yeast strains with complex genetics and ploidy. For example, users can potentially screen thousands of commercial strains to determine if they are amenable to metabolic engineering, and tolerant of the end product.

In theory, the piggyBac can be further optimized to stably integrate high copy numbers of the transgene into the genome. The system can also accommodate other complex metabolic pathways and even be configured for other fungal species as well.

Overall, the piggyBac system has an enormous cargo-carrying capacity (well over 200kb) and can quickly validate a strain for its potential in the biosynthesis of highly valuable metabolites. This type of production can now be accomplished in a more cost-effective and efficient manner with the implementation of the piggyBac system.

piggyBac can be paired with Demeetra’s Cas-CLOVER targeted nuclease “the clean alternative to CRISPR/Cas9” for knockouts, knock-ins and base-pair edits in the user’s strain of interest. For example, to facilitate the use of nutritional markers and eliminate the use of antibiotic selection markers in potential commercial strains. Additionally worth noting, any synthase can be cloned into the piggyBac vector for rapid screening in any S. cerevisiae yeast strain.

To learn more about piggyBac and how Demeetra can help accelerate your gene editing research with our toolkit, click here. If you’d like to discuss licensing and forming a partnership, fill out the form and we’ll get back to you right away.