Seamlessly Upgrade Your CRISPR Toolbox From Cas9 to Cas-CLOVER™

Over a decade ago, Cas9 came on the scene as the first RNA-guided nuclease, simplifying and expanding the use of gene editing. But now it’s time for an upgrade in performance and economy. Single RNA-guided Cas9 yields high off-target mutation frequencies, which often result in disruptions to product development. The small blunt-ended genomic deletions created by Cas9 limit its utility for large deletion knockouts and knockins. Importantly, commercial licensing requirements for Cas9 are confusing and impractical for many applications, such as bioprocessing, synthetic biotechnology, agriculture, and even for the development of new mosquito control innovations.

Synthetic biotechnology is different with Cas-CLOVER

Cas-CLOVER, like CRISPR/Cas9, is an RNA guided system that maintains its simplicity; but, unlike Cas9, it uses a dimeric nuclease called Clo051 to edit the genome. Since the editing is done with Clo051, a dimeric nuclease, off-target risk is reduced to near zero, deletions are larger, knock-ins are more efficient, and licensing is straight-forward. Cas-CLOVER seamlessly integrates into existing gRNA design and manufacturing platforms. Check out the Demeetra designing gRNAs for Cas-CLOVER User Guide for more information. Here, we summarize one commercial synthetic biotechnology application powered by Cas-CLOVER.

The yeast Saccharomyces cerevisiae is one of the most frequently used microorganisms in biotechnology when producing bulk quantities of biochemicals. Exploiting the simplistic culturing requirements and ease of manipulating S. cerevisiae, Cas-CLOVER was used to systematically create yeast strains with multiple mutations that are easily rescued by selectable markers (ura3, leu2, his3, trp1)—offering more versatility as a bioprocessing platform. All nutritional marker gene knockouts are full ORF deletions facilitated by homology directed repair (post Cas-CLOVER cutting), with donor PCR fragments that encompass 200 bp upstream of the translation start-site and 200 bp downstream of the stop codon (Figure 1A). Utilizing these resulting auxotrophic engineered yeast strains in conjunction with Super PiggyBac transposase/transposon technology also offers efficient detection and selection of positive integrated cargo (Figure 1B).

Figure 1. A) Engineering S. cerevisiae with Cas-CLOVER to enhance bioprocessing platform. Precise cutting with the use of dimeric Cas-CLOVER and two gRNAs targeting genes that encode essential amino acids required for growth. B) Engineered S. cerevisiae strains (A) can be used with the Super PiggyBac transposase/transposon system to integrate biopesticide cargo along with a selectable nutritional marker (PNut = nutritional promoter, N.gene = nutrition gene) randomly at “TTAA” sites that allows ease of detection and positive genetic integration.

In addition to the versatile bioprocessing platform for transposase integration, S. cerevisiae lack components of the RNA interference (RNAi) pathway, enabling this organism to become a cell biofactory and delivery system of RNAi molecules for control of human disease vector mosquitoes, which kill hundreds of thousands of people across the globe each year.1,2

Recently, hundreds of larvicidal interfering RNA pesticides (IRPs) that silence genes critical for mosquito larval survival have been identified via high-throughput screens.3–7 Many of these larvicidal IRPs, intriguingly, are female specific.5–7 They thus give a direct path to killing female mosquitoes, which transmit disease-causing pathogens through their bites. For example, viruses that cause West Nile and several encephalitis diseases are spread by Culex spp. mosquitoes.

In collaboration with the lab of Molly Duman-Scheel, PhD, at Indiana University School of Medicine, yeast strains with multiple integrations of female-specific RNAi cargo directed toward Culex quinquefasciatus were successfully generated using the Cas-CLOVER and PiggyBac systems. Various strains expressing female-specific larvicidal IRPs were then tested in laboratory larvae killing experiments in which dried, heat-inactivated yeast consumed by the larvae effectively killed female mosquitoes yet did not harm males. Moreover, using the Cas-CLOVER strains, lethal dosages could be obtained with a smaller amount of yeast, making the intervention more cost effective (prepublication data not shown). Silencing of the target gene was verified in fourth instar C. quinquefasciatus larval brains (Figure 2). 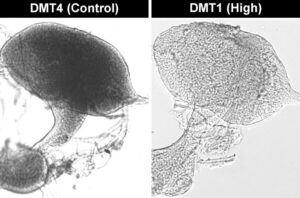 Figure 2. Engineered yeast (DMT1) were harvested, heat inactivated, and fed to mosquito larvae. DMT4 was used as a control strain which transiently expressed scrambled RNAi sequences. Silencing of the target gene was verified through in situ hybridization. Experiments were performed on fourth instar larval brains.

According to Duman-Scheel, this exciting new technology has many applications for mosquito control. She notes, “In addition to the use of the yeast as larvicides, it could be useful for population-control interventions, such as the sterile insect technique, that rely on mass production and release of male mosquitoes, a process that would be greatly facilitated by the use of female-specific pesticides during the mass rearing process of male mosquitoes.” These studies indicate that precise, whole-gene knockouts with the dimeric Cas-CLOVER technology can seamlessly engineer a versatile bioprocessing platform for bioproduction, and that this technology has many real-world applications.