According to the American Mosquito Control Association (AMCA) over 1 million people die each year from mosquito-borne diseases including Malaria, Zika, and Yellow Fever just to mention a few. In addition to its disease spreading capacity, mosquitos are a major backyard and vacation destination nuisance. New research using genome edited yeast that produce RNAi biopesticides show promise for controlling this dangerous and annoying adversary.

The Importance Of Sex-Specific Gene Targets For Larvicidal Research

There are very few putative long non-coding RNA (lncRNA) genes that have been functionally validated in insect genomes, even though many have been identified. One recent Scientific Reports study screened for female-specific larvicides that can be used to facilitate Aedes aegypti (and can be expanded to other species) male sex separation in the lab and uncovered multiple interfering RNAs with target sites in IncRNA loci that are closely linked to sex determination. It was found that after larvae had consumed an engineered Saccharomyces cerevisiae yeast strain, which expressed interfering RNA linked to IncRNA transcripts, significant female death occurred with no impact on male survival. 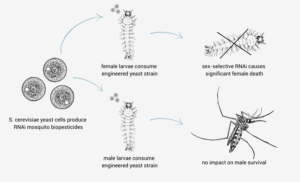 Further incorporation of this engineered yeast larvicide into mass culturing and scaled production effectively separated fit adult males, showing that the capabilities of engineered RNAi bio-larvicides could potentially benefit certain population control strategies in mosquitos. Let’s take a closer look at this study and how engineered yeast, which can be obtained easily with Demeetra’s biotechnology, played a large role in the success of this research.

Female mosquitoes are quite different from males in many characteristics, including morphology, physiology, and behavioral traits such as blood feeding, which is the main factor that promotes the spread of disease-causing pathogens. Genes that regulate female-specific traits are hence novel targets for vector control, although most of them have not yet been characterized yet. This holds true for mosquito species Aedes Aegypti, the primary vector for deadly arboviruses that cause diseases such as Zika, chikungunya, yellow fever, and dengue.

Current population-based strategies for mosquito control, such as sterile insect and incompatible insect techniques, can be inefficient because they are usually dependent on the mass release of adult male mosquitos, requiring massive labor requirements for larvae sex-sorting in the lab. However, the proper identification of these genes with female-specific functions could help in the efforts of finding genetically-based sex-sorting technologies that make current population-based mosquito control strategies more effective, scalable, and affordable. Demeetra has licensed the aforementioned yeast interfering RNA technology, leading to some major forward leaps in these efforts.

The Biotechnology Behind The Study

Although characterization and genetic sequencing of A. aegypti’s M/m sex-determining region have had many roadblocks in the past, recent innovations with technologies have generated an improved and re-annotated genome assembly that facilitates more effective research with IncRNA genes in this region. The research team in the study silenced several transcripts of these IncRNA genes with cutting-edge RNAi technology. The research team found multiple female-specific targets for M/m locus region IncRNAs in larvae that could be used for further development of scalable population control strategies. Below, Figure 2 from the report shows female-specific larvae killing efficacy from one RNAi target #478.

This innovative  yeast manufactured biopesticide technology could easily be implemented and thus provide benefits on a global scale in the future. Additionally, these bio-larvicides would not require the need to genetically manipulate existing mosquito strains already developed for population control strategies.

Our flagship gene editing system, Cas-CLOVER, exhibits high specificity and efficiency, and has enormous advantages and financial freedom over the limitations of other gene editing technologies. Cas-CLOVER has virtually undetectable off-target activity with precise cutting mechanisms, and that’s why it is rapidly becoming the prevalent system for studies as described above. 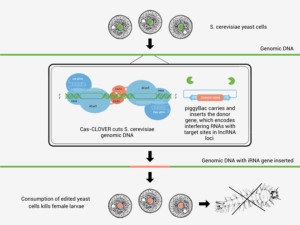 Figure 3: An example of how Demeetra’s gene editing technology could be used to efficiently and accurately insert genes into S. cerevisiae cells

When working with Cas-CLOVER, research teams benefit from faster and safer development of products through Demeetra’s innovative platform. To learn more about how Demeetra can help accelerate and enhance yeast gene editing research with our toolkit, click here. If you’d like to discuss licensing and forming a partnership, fill out the form here and we’ll get back to you right away.