View the presentation below. 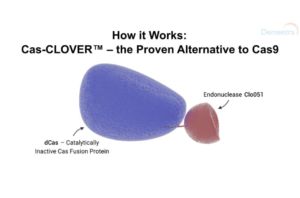 Our Cas-CLOVER technology uses a catalytically inactive dCas protein as an RNA-guided fusion protein. We fuse this protein to an endonuclease called Clo051 from a Clostridium bacteria. 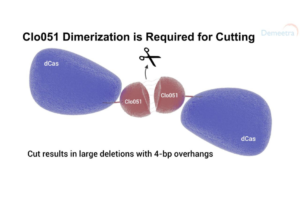 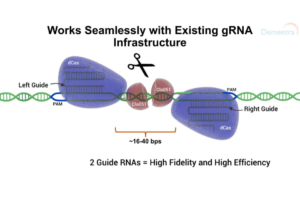 Clo051 is an obligate heterodimer, so it needs to dimerize for cutting. This dimerization results in large deletions with four base overhangs, creating a higher knock-in efficiency during cutting. Our technology works seamlessly with the existing guide RNA infrastructure that is typically used for CRISPR/Cas9. We use a guide RNA pair (2 gRNAs), creating a higher fidelity and efficiency system. Our Clo051 dimerization also has a very flexible spacer length. This spacer length creates a user-friendly experience when designing system guides.

Demeetra uses a yeast ADE2 reporter assay as a convenient method to screen for enhanced cutting efficiency. Cas-CLOVER will create a double-stranded DNA cut in the ADE2 ORF. Then, homologous recombination with a donor DNA fragment with flanking homologous fragments creates a full ADE2 gene deletion. This results in the accumulation of an adenine biosynthetic precursor, creating a red colony phenotype. On the right side of the slide below, we’ve shown a typical plate from a wild-type Cas-CLOVER experiment. This plate shows moderate cutting efficiency, but also moderate cellular toxicity, resulting in low colony counts. 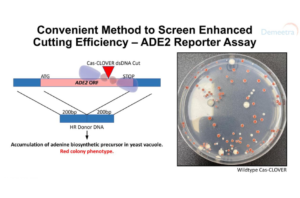 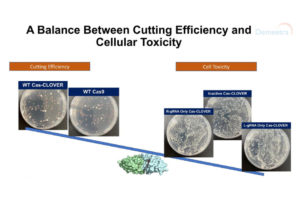 We turned to previous literature on a similar endonuclease called FokI. FokI is another type II restriction endonuclease often associated with zinc fingers. Clo051 shares about 50% identity and 75% similarity with FokI. The researchers who conducted this study (Miller et al. 2019 Nat Biotech) created variants of FokI and then looked at each variant’s ratio of on-to-off-target frequencies without compromising the actual on-target frequency. We started by choosing the top six equivalent mutations in Cas-CLOVER to the FokI mutations in the study, and tested them out in our ADE2 reporter system. 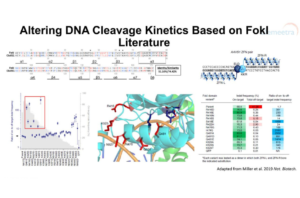 This test completely abolished almost all of our Cas-CLOVER cutting efficiencies, showing that though Cas-CLOVER and FokI might be similar in amino acids, they act very differently as a complete protein. 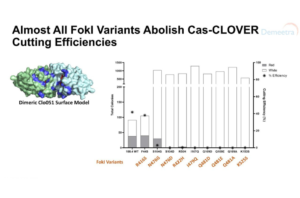 Next, we decided to try a structure-guided mutagenesis approach. We used the ChimeraX model, which uses AlphaFold 2 prediction software. We aligned this to the protein structure of FokI. We discovered an unstructured loop between the catalytic site and where the DNA is projected to bind to FokI or Clo051. 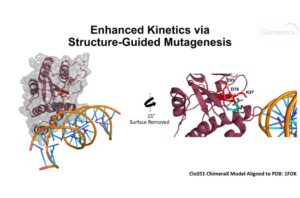 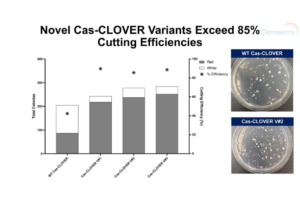 We then did an even more extensive screen to identify any variant that could improve on these three. Many of the variants we found did increase cutting efficiency, but only one drastically decreased cellular toxicity as well – variant number 14. 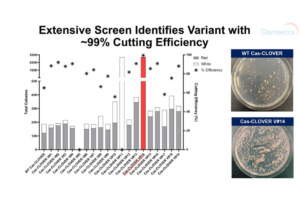 The two plates above show the difference between wild-type Cas-CLOVER and our new variant “CLOVERx”. Compared to the wild-type plate, variant number 14 contains many more colonies and all of them are red. We have almost 99.5% cutting efficiency with very low toxicity.

We have used this Cas-CLOVER system to create bio-processing platforms for different customers and clients. Below we show a collaboration with Dr. Molly Duman Scheel at the University of Indiana where we used the new Cas-CLOVER variant to make the bioprocessing platform for female-mosquito-specific larvicidal IRPs. We also used our super piggyBac transposase/transposon system to select for integration of the biopesticide gene.

Using these two Demeetra tools, we made multiple yeast strains with varying levels of female-specific IRPs. When these strains were tested in a larvicidal killing assay, they did indeed kill only the female larvae without affecting the males.
This can be validated by in situ hybridization, where you see the targeted silencing of that specific target in the larvicidal brains, on the bottom right of the slide below. 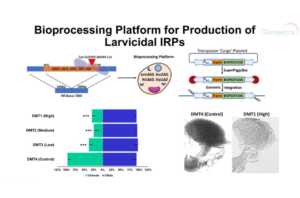 We have also used our Cas-CLOVER technology to make GS knockout suspension cells, which are commercially valuable. A multiplexed system using two different guide pairs, yielded a 196 base pair deletion at the target exon. 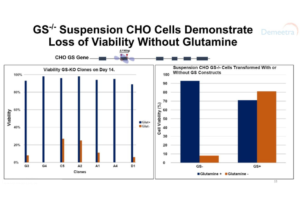 Comparison between Cas-CLOVER and CRISPR/Cas9 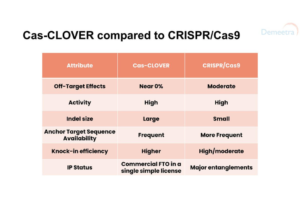 Cas-CLOVER also has high knockin efficiencies because it creates larger overhangs. Unlike the IP entanglements that complicate CRISPR/Cas9 use, Cas-CLOVER offers commercial freedom-to-operate with a single source and simple structured license.

Do you have any questions about our technologies or the bioprocessing evaluations we offer?

Schedule a call with us to learn more.