Increasing Efficiencies in Bioprocessing with Cas-CLOVER 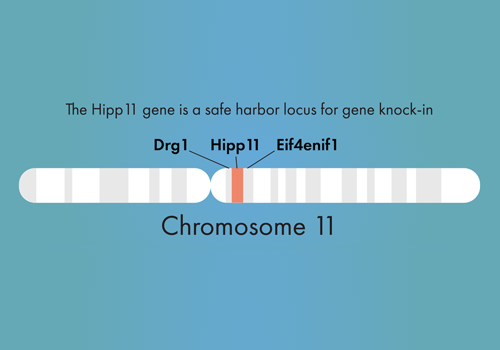 There are multiple mammalian cell expression systems used in the production of biotherapeutic proteins. However, development of recombinant mammalian cell lines is often delayed because of the unstable and variable transgene expression associated with random integration. To remedy this common gap in research, Demeetra has developed an efficient strategy for site-specific integration of one or multiple copies of genes of interest (GOI).

Demeetra’s Cas-CLOVER system enables efficient insertion of a gene expression cassette at well defined loci in mammalian cells, thus resulting in high yield homogenous protein production. As such, the Hipp11 (H11) gene was targeted as it is well characterized as a “safe harbor” locus for gene knock-in within CHO-S cells.

First, let’s take a look at the identification of the H11 locus as an effective integration site. A “safe harbor” genomic locus is known to be very effective for transgene and expression and the knock-in will not negatively affect the characteristics of the cell. The Hipp11 (H11) locus, which is situated between the Drg1 and Eif4enif1 genes in multiple animal models, offers extensive potential for providing stable gene knock-in and high amounts of expression. [1, 2] The robustness of H11 has been demonstrated in mice, pigs, human embryonic stem (hES) cells, and induced pluripotent stem (iPS) cells. [1–3]

In collaboration with our service partner Hera BioLabs, Demeetra set out to establish Cas-CLOVER targeted knock-in reagents and protocols at the Hipp11 safe harbor locus. Our proof-of-concept (POC) strategy outline is shown below and requires the knock-in of a not-so-small 4kb piece of DNA. (see figure below). 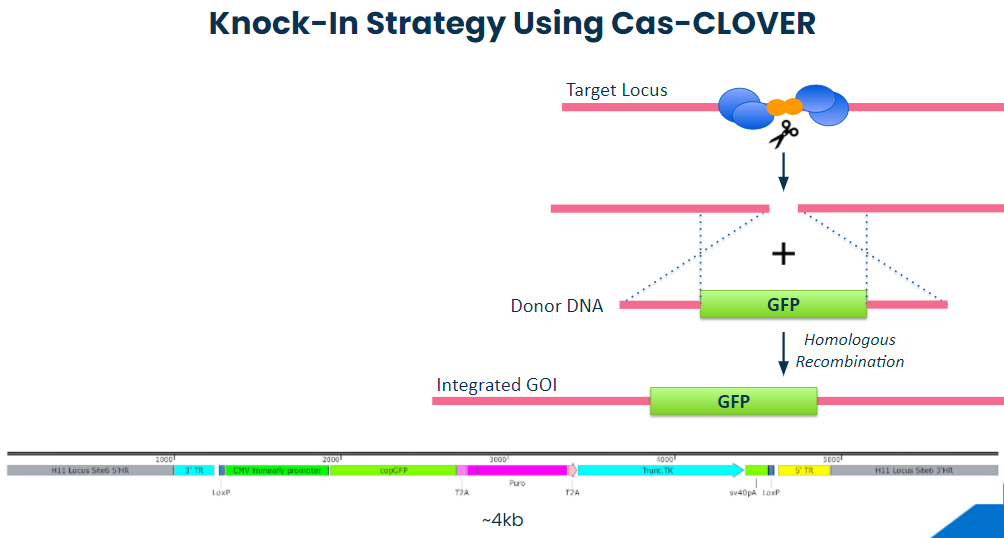 Our results demonstrate that by using the Cas-CLOVER system, one can achieve extremely high targeted knock-in efficiency in as little as two weeks. Following a short 10-17 day cell culture and selection process, the knock-in efficiency was estimated to be 80-90%. Targeted integration at the H11 safe harbor site was confirmed by sequencing as shown below. 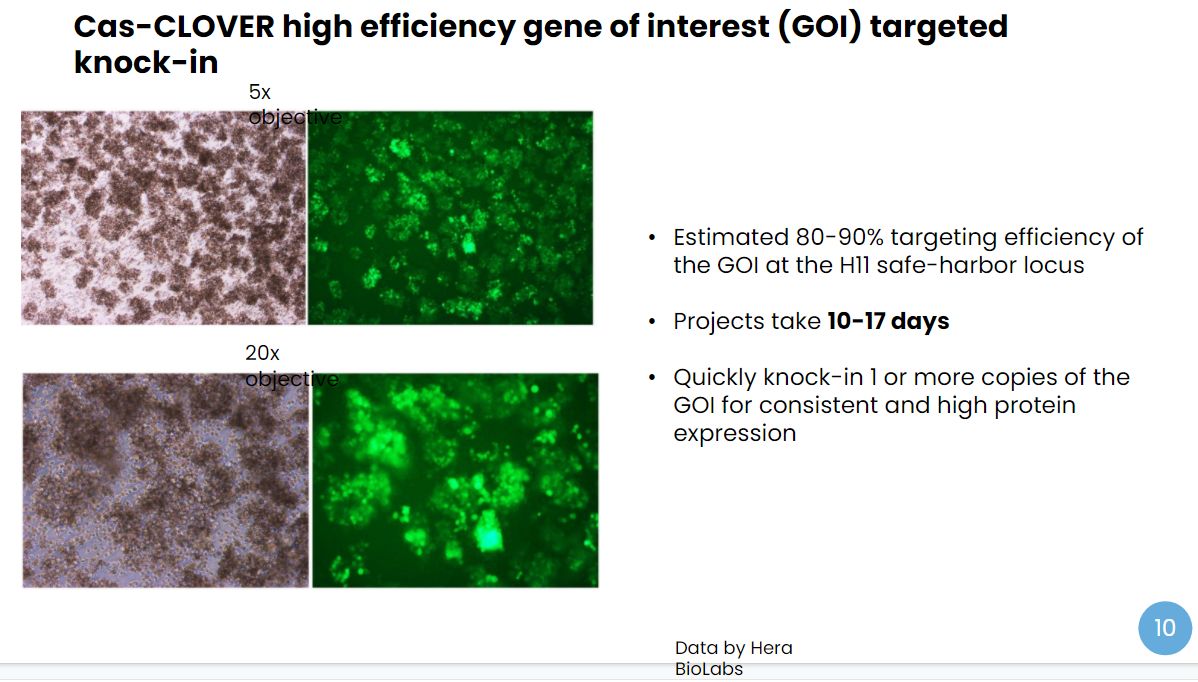 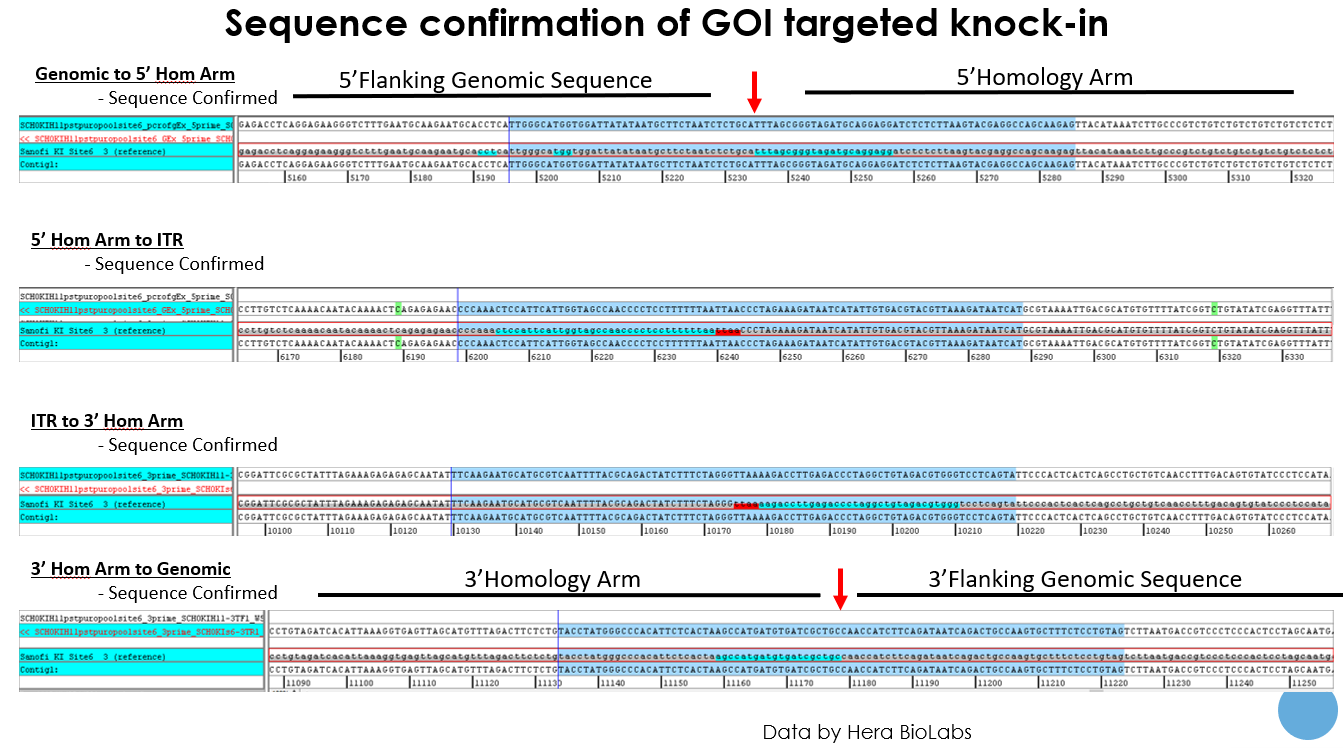 In comparison, random insertion yielded 0.68% in this study, and 1.32% GFP-positive cells in the CHO-S and HEK293T cells respectively. Targeted integration can also be achieved by using traditional CRISPR/Cas9, where one study showed indel frequencies of 0% and 43% at H11.[4] The Cas-CLOVER platform takes gene editing for bioprocessing to the next level. Findings with the dimeric Cas-CLOVER have already demonstrated more accuracy (i.e. 0% off-target mutagenesis) than traditional CRISPR/Cas9. Off-target analysis in CHO cells with CRISPR/Cas9 have shown as high as 10% unwanted cutting, which could negatively impact the cell line and defeat the purpose of safe harbor integration.

Speak with Demeetra to learn more about acquiring rights to gene editing technology Cas-CLOVER, for pharmaceutical bioprocessing. Unlike CRISPR/Cas9 which has multiple licensing entanglements, Demeetra’s Cas-CLOVER gives you the full freedom to operate in a single license for commercial use.

Cas-CLOVER has a ton of features that are unique for bioprocessing. First, you will have access to technology that’s currently being used by Big Pharma and large CDMOs. Additionally, Cas-CLOVER gRNA pairs at the GS locus (knockouts) and H11 safe-harbor site (knock ins) are completely validated. Your team will also have a continuous supply of Cas-CLOVER mRNA, including optimized protocols for suspension CHO cells for both transfection and nucleofection.