Using Unbiased Analysis Cas-CLOVER’s Maximum Potential Off-target Is Under 1% Where CRISPR/Cas9 Is 5-13%.

Two off-target analyses have recently been performed with Cas-CLOVER which resemble similar findings in previous research that prove it’s an exceptional alternative to the CRISPR/Cas9 platform.

Cas-CLOVER is a cleaner gene editing alternative to CRISPR/Cas9 for research and in particular commercial applications. Similar indel frequencies can be achieved as compared with CRISPR/Cas9. Cas-CLOVER is a highly specific system demonstrating essentially no detectable off-targets, as well as being covered by issued patents with clear freedom-to-operate.

CRISPR/Cas9 technology has been utilized successfully in many cell lines. However, CRISPR suffers from two flaws, off-target mutagenesis, which is a huge flaw considering the need for efficiency and scalability on a commercial or industrial level. In addition, intellectual property (IP) entanglements or lack of clear commercial freedom to operate have limited its use commercially.

The first off-target analysis with Cas-CLOVER was done using specific algorithms to predict any of the closely-related sequences to the target, which could in turn lead to potential off-target sites. These sites were then deep-sequenced by next-generation sequencing (NGS) and were found to have no mutations above normal background for any of the predicted sites. Below are a few figures representing Cas-CLOVER’s effectiveness at preventing off-target activities. 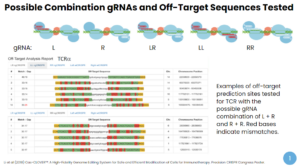 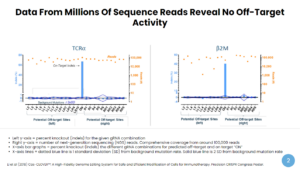 Cas-CLOVER has also been used to create human therapeutic product candidates by our sister company, Poseida Therapeutics. In addition to the NGS work, extensive off-target analysis has demonstrated essentially no off-target cutting above background frequency.

In the image below, Cas-CLOVER edited T-cells from seven donors were analyzed by iGuide-seq followed by Ampli-seq. After filtering out background, only 19 potential off-target sites were identified.. Targets 1 & 2 below have no homology to the target site gRNAs and may be false positives. The rest of the sites show under 0.1% indel rate in all donors and are likely false positives. On target cutting rates are typically over 90%. These data represent a 10x more extensive “unbiased” off-target analysis using Guide-seq than what has been done with other technologies. As shown below Cas-CLOVER outperformed all technologies in both lower potential off-target and on-target. Compared to Cas-CLOVER’s very low maximum potential off-target rate of under 1%, CRISPR/Cas9 was between 5-13%. 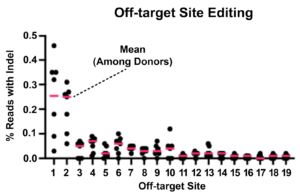 When working with Cas-CLOVER, research teams benefit from faster and safer development of products through Demeetra’s innovative platform. To learn more about how Demeetra can help accelerate your gene editing research with our toolkit, click here. If you’d like to discuss licensing and forming a partnership, schedule a call with us.