The Definitive Guide to Gene Editing in Rice

Why is Rice Important?

Rice is a staple food for over 3.5 billion people worldwide. With deep roots in many Asian, Middle Eastern, Latin American, and African cultures, rice now helps feed about half of our global population. Rice has utility in ceremonies, is used in homeopathic medicine, and accompanies many traditional cuisines. Unlike many other grain crops, a vast 95% majority of rice crop yield is consumed by humans as opposed to livestock, highlighting the potential impact of rice crops in addressing global health issues like malnutrition. 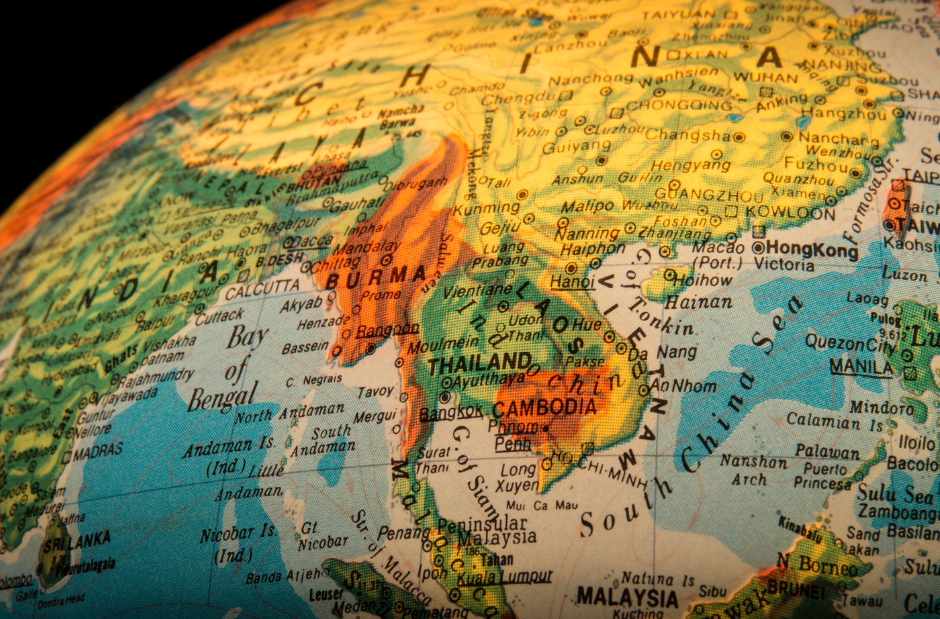 There is very early evidence of rice cultivation, with the earliest archaeological evidence originating from 7000–5000 BCE China. However, as the human population hits 8 billion, optimizing rice crops becomes even more vital for the mammoth task of feeding our still growing population.

A better understanding of rice itself can help us address the staple crop’s increasing global demand.

How Does Rice Grow?

With the exception of the upland variety, all rice grows in a similar wet and warm environment. The plants are grown on submerged land in coastal plains, tidal deltas, and river basins of tropical, semitropical, and temperate regions. Rice production can devour water resources and finding the ideal balance of hot and wet can prove challenging for farmers. Not only is field maintenance labor intensive, but fields provide the perfect environment for pests, bacteria and viruses. Climate change also pressures rice farmers as flooding can destroy paddies and heat waves can kill plants all together. 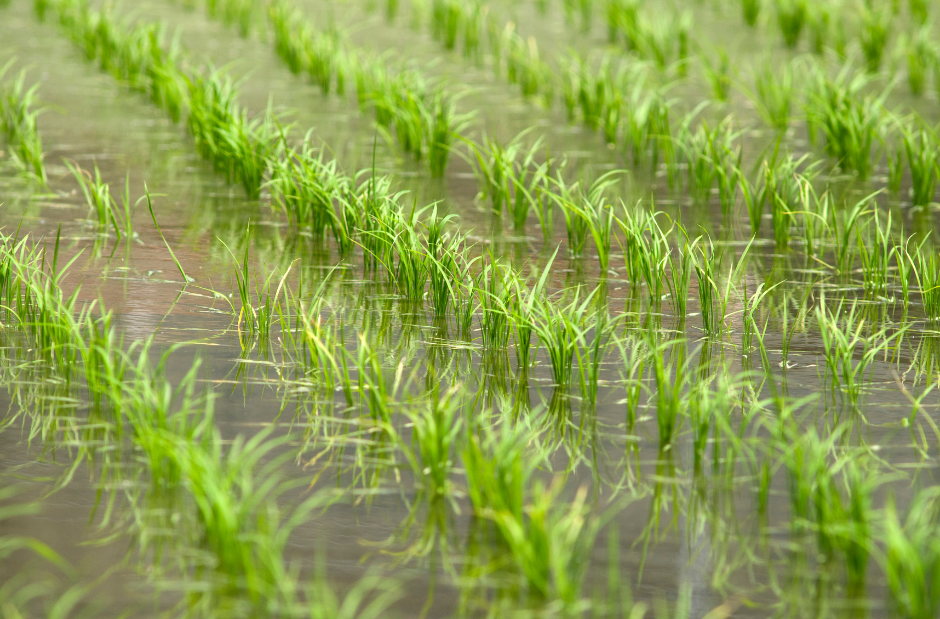 How Has Gene Editing Been Used in Rice?

Did you know that the CRISPR/Cas system was pioneered in rice?

Rice is the perfect candidate for gene editing with a small genome size, available sequence data, and a range of proven cell editing techniques.

To date, the Cas9 system is the most prevalent gene editing technology that has been used to improve rice’s grain yield, abiotic stress tolerance, disease resistance, herbicide resistance, and rice grain quality. We have selected 2 recent studies highlighting opportunities in gene editing of rice.

Editing the Rice Genome with CRISPR/Cas9 and piggyBac

This paper explores a new strategy for the piggyBac-mediated transgenesis system for the temporary expression of CRISPR/Cas9 in rice. This approach makes it possible to induce CRISPR/Cas9-mediated mutagenesis efficiently followed by seamless elimination of the transgene when it is no longer needed, without the need to cross-breed – especially important for vegetatively propagated crops.

The strategy works as follows: 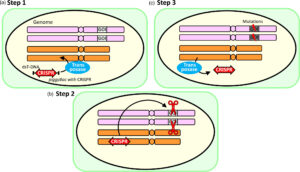 This experiment evaluates applied piggyBac-mediated transgenesis to the delivery of expression cassettes for Cas9 and guide RNA into the rice genome. Excision of the latter occurred after induction of CRISPR/Cas9-mediated targeted mutagenesis.

One line (pDOH/gLig1Cas9 #1) was found to be a piggyBac-mediated transgenic line.

The piggyBac transposon carrying the CRISPR/Cas9-expression cassette was inserted into the promoter region of gene, and was later excised precisely from the integration site on chromosome 7 without re-integration. All progenies were demonstrated to lack the piggyBac sequences in the genome after excision.

Although hyPBase was stably transformed to remove the CRISPR/Cas9 expression cassette from the host genome, this study confirmed that only targeted mutations by CRISPR/Cas9 were left at the target gene via the temporary piggyBac-mediated transgenesis system in rice.

The team used CRISPR, which introduced certain constraints to the scope of the study. For one, gene editing with CRISPR/Cas9 features a high risk of high off-target mutations. So, even though the CRISPR expression cassette was excised, the risk of artifacts in the rice genome was still high due to the fact that the CRISPR-mediated double-strand breaks may not have occurred solely at the target sites. Another disadvantage of using CRISPR is its confusing and restrictive licensing. Especially for commercial users looking to apply their discoveries to their product pipeline, the red tape around CRISPR licensing often prevents work in crops. An added layer of regulation applies to crops destined for human consumption.

We propose the use of Cas-CLOVER in rice instead. Our flagship alternative to CRISPR has demonstrated 99% indel accuracy. Further, we are the sole licensor of Cas-CLOVER for agriculture, and we offer flexible, simple licenses that are designed to make it easy to utilize the technology commercially.

Learn more about the advantages of using Cas-CLOVER in plants.

This piggyBac-mediated temporary transgenesis system can make a valuable contribution toward the establishment of efficient targeted mutagenesis in plants. However, targeted nucleases such as CRISPR/Cas9 and Cas-CLOVER are not always needed to genetically improve crops; piggyBac can be used as a stand-alone platform.

One way to substantially improve rice crops is through adding herbicide resistance genes to rice’s genome. Cultivating rice that is resistant to herbicide opens opportunities for super-efficient weed control without negative implications to crops.

In another article, herbicide resistance to bispyribac sodium is conferred into the ALS gene of rice via gene targeting with subsequent marker excision by piggyBac transposition; providing a general strategy for the targeted modification of endogenous genes in plants.

According to the authors, “Almost all regenerated plants expressing piggyBac transposase contained exclusively targeted point mutations without concomitant re-integration of the transposon, resulting in these progeny showing a herbicide bispyribac sodium (BS)-tolerant phenotype.”

Figure 2: Introduction of point mutations into the ALS gene via GT using a positive–negative selection system

See Figure 2a for a schematic diagram of GT at the ALS locus. The top line indicates the genomic structure of the wild-type ALS gene region. The bottom line shows the T-DNA region of the targeting vector carrying diphtheria toxin A subunit gene (DT-A).

Figure 2b outlines the team’s strategy for precise marker excision using the piggyBac transposon from the GT locus.

The top line reveals the structure of the modified ALS locus resulting from homologous recombination between the targeting vector and wild-type locus. The bottom line represents the ALS locus modified by GT and subsequent precise marker excision via piggyBac transposition.

Some additional notes for interpreting Figure 2b:

Tolerance to herbicide was conferred via 2 point mutations in the ALS locus specifying 2 amino acids W—>L (TGG —>TTG) and S—>I(AGT—>ATT).

Thus, 99 and 92% of ALS GT-A_hy and B1_hy regenerated plants were found to be marker-free rice plants containing two point mutations W548L and S627I in the ALS locus. Mutant plants containing desired point mutations and lacking residual sequences were obtained successfully in a more efficient manner than traditional homologous recombination without selection in protoplasts. A precise system of marker excision from GT loci using piggyBac transposon will become an indispensable technology for targeted gene modification leaving no residual ectopic sequences in the plant genome.

What is Next in Rice Genome Editing?

With 99% efficiency, easier screening, and simple agricultural licensing, Cas-CLOVER surpasses Cas9 in multiple facets. Cas-CLOVER has been validated in plants for crop trait engineering and shown to create precise knockouts in tobacco. 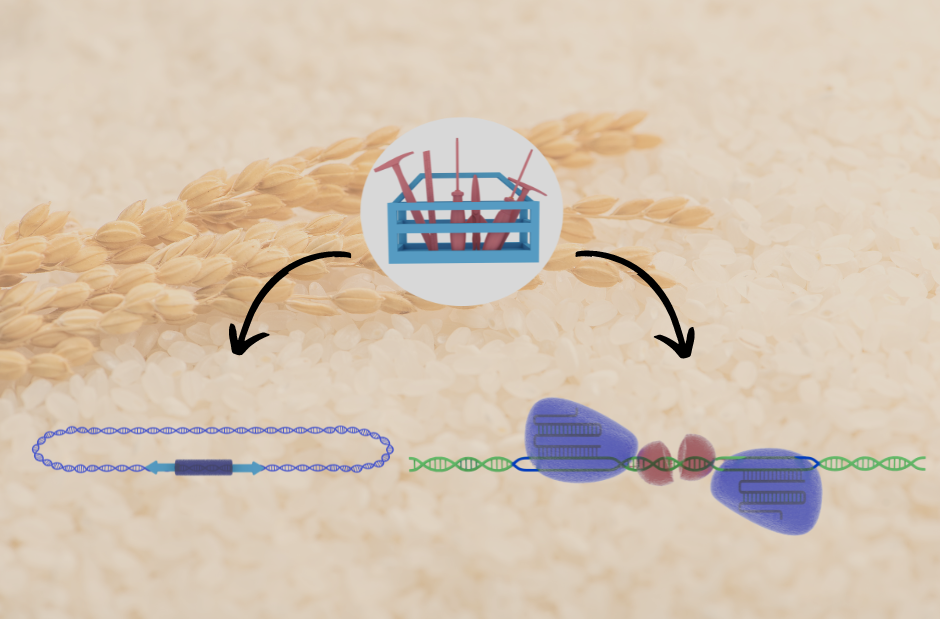 Homologous recombination in rice is a rare event and positive selection markers are highly relied upon for efficiency. The piggyBac system streamlines this process by seamlessly removing selection markers from the edited locus, foot-print free. Demeetra also offers simple licenses to piggyBac transposase for agriculture.

Schedule a call today to continue to push the boundaries of your crops.