The standard care of treatment for many types of cancer and infectious diseases around the world is currently chemotherapy. However, chemotherapies are widely known to be linked to severe toxicity and resistance that develop mostly due to non-specificity, leading to overall disease progression. 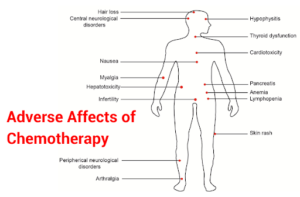 Figure 1b. Chemotherapeutics have poor specificity which results in higher doses of medication due to the lack of bioavailability. Higher doses result in increased toxicity to healthy cells, drug resistance, and various other side effects pictured here.

To combat these limitations, recent advancements in recombinant technologies have created some novel genetically-engineered protein polymers such as Elastin-like polypeptide (ELP), Silk-like polypeptide (SLP), and hybrid protein polymers with specific sequences to impart consistent and precise features to target proteins, and which have given excellent preclinical results in studies so far.

The synthesis and administration of chemotherapeutics have thus made use of these protein polymers, overcoming many of the limitations of traditional therapeutics.

The research team responsible for a recent publication summarizes the development of such advanced recombinant protein polymers, and discusses the main challenges associated with designing targeted delivery systems for chemotherapeutics, as well as the potential for unique gene editing platforms like Demeetra’s Cas-CLOVER to further enhance their applications in the future.

Recombinant protein polymer research has grown significantly in popularity over the past few decades mainly because it has addressed a number of problems with traditional drug delivery systems. Many of these new polymers were discovered to be highly effective at delivering therapeutic payload, and some of them have even received FDA approval.

Natural protein polymers are utilized in forms such as nanoparticles, micelles, scaffolds, and hydrogels as the vehicles for targeted drug delivery to tissues. 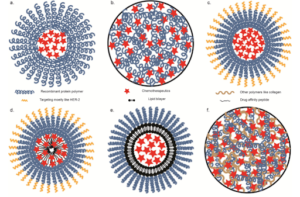 Nevertheless, despite their effectiveness, there are a number of significant issues with these current systems that must be resolved.
Natural protein polymers are currently widely available, manageable, and affordable for use in a variety of biological applications, but they still have some drawbacks. For example, batch-to-batch deviations in raw materials can render the final products being prone to efficacy variance. Additionally, the molecular weight of the protein polymers limits their usage to only a few dozen applications at this time. 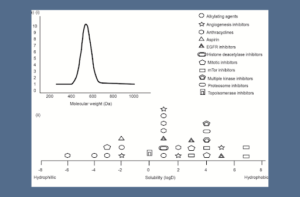 In response to these and other problems, genetic engineering has been used to develop recombinant protein polymers. These new polymers are synthesized using identical sequences and scaled up for large-scale production, thus resulting in protein polymers without as much batch-to-batch variance as before. 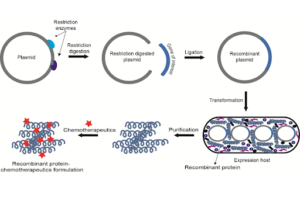 This technology offers new strategies for controlling molecular weight and the overall structure of the target protein. Additionally, other targeting sequences can be further fused with the protein for advanced drug delivery applications in the near future. The team in this study mentioned Cas-CLOVER as a great example for this application, as it has the potential to revolutionize the world of therapeutic bioprocessing by making precise, intentional and beneficial edits in platform bioprocessing cell lines – resulting in efficient and effective developmental control.

Cas-CLOVER is a highly specific system demonstrating 99%+ efficiency, and it’s covered by issued patents with clear commercial access. To learn more about Cas-CLOVER, and how Demeetra can help accelerate your recombinant protein polymer studies, click here. We have everything for your gene editing needs, including flexible front or back-loaded service terms and licensing options.