Yarrowia lipolytica has been one of the most relevant yeast strains for synthetic biology in recent years, with many studies showing promise for its increased capacity in bioprocessing. There’s only one constraint – having essential genetic modification tools necessary to become a fully utilized yeast platform at an industrial scale. Non-conventional Y. lipolytica is currently known for high yield production of FDA designated Generally Regarded as Safe (GRAS) molecules for food additives and industrial purposes.

Y. lipolyticais of industrial interest because it’s a good natural producer of many compounds including citric acid, erythritol, and various proteins and lipids. The ability of this strain to grow at high cell densities and to produce large titers of valuable molecules has attracted the attention of the scientific community over the past few years, especially in biofuel production. Specifically, microbial lipids have gained so much consideration due to their potential to replace petroleum as a main source of fuels and chemicals.

Through further research, Y. lipolytica has the potential to act as a biotechnological workhorse in a wide range of other industrial applications as well.

The piggyBac transposon is a versatile system that has been demonstrated to efficiently develop cell lines and strains that highly express genes of interest. Targeted nuclease gene editing technologies such as CRISPR/Cas9 and Cas-CLOVER rely on a specifically designed guided RNA to cut the genome, while piggyBac transposase uses a cut-and-paste mechanism that randomly integrates at TTAA sites, favoring highly expressed sites. As such, piggyBac® has been widely used in the fields of bioprocessing.

The piggyBac system permits quick validation of a strain for its potential in the biosynthesis of high value metabolites and small molecules. And as you will see below, piggyBac is suitable for non-conventional yeast strains for bioprocessing and large-scale gene knockout libraries.

Recent research (Wagner & Alper, 2018) leveraged piggyBac’s ability to integrate into broad sections of the genome without the need to know the target sequence or to build guide RNAs for each target. 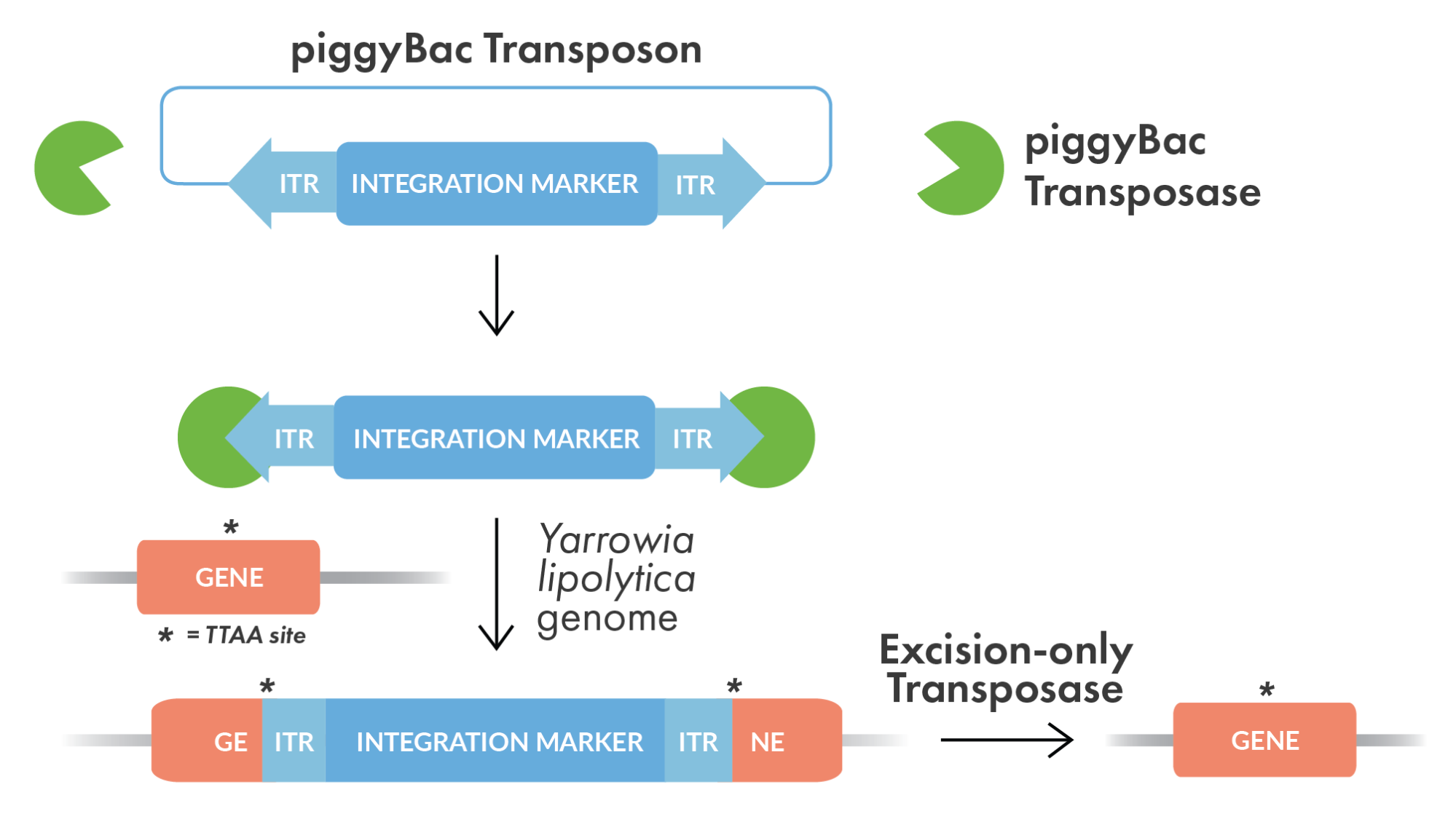 One area of interest for non-conventional yeast strains is genetic engineering for enhanced lipogenesis. The authors used piggyBac integration to identify a mutation in the previously uncharacterized MHY1 promoter that led to a 47% increase in lipid bioproduction (see figure 3). 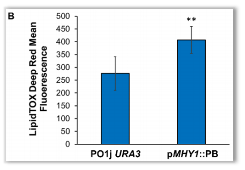 Y. lipolytica provides a promising platform to produce a wide range of lipid-based bioproducts. In the future, these platforms will be greatly enhanced when highly engineered Y. lipolytica is tailored to efficiently convert different agro-industrial byproducts, food waste materials, and other low-value lipids into valuable compounds with acceptable yield and adequate productivity for industrial scale applications.

New genetic tools like the piggyBac system will help to facilitate and accelerate the engineering of Y. lipolytica strains for efficient and sustainable production of a wide variety of small molecules and proteins now, and in the near future.

In practice, targeted nucleases and transposons are highly complementary and their synergistic use enables more rapid prototyping of precise genetic modifications – and this is where Demeetra shines.

Our technology is different from the typical licensing agreements of other gene editing platforms. We offer commercial freedom to operate on any species, and simple accessible licenses to all users. For synthetic biology applications we hold the technology licenses for research and commercial fields of therapeutic bioprocessing, industrial biotechnology & agriculture. We also offer licenses and strategic development partnerships with all of our products.

To learn more about piggyBac and how Demeetra can help accelerate your gene editing research please click here.