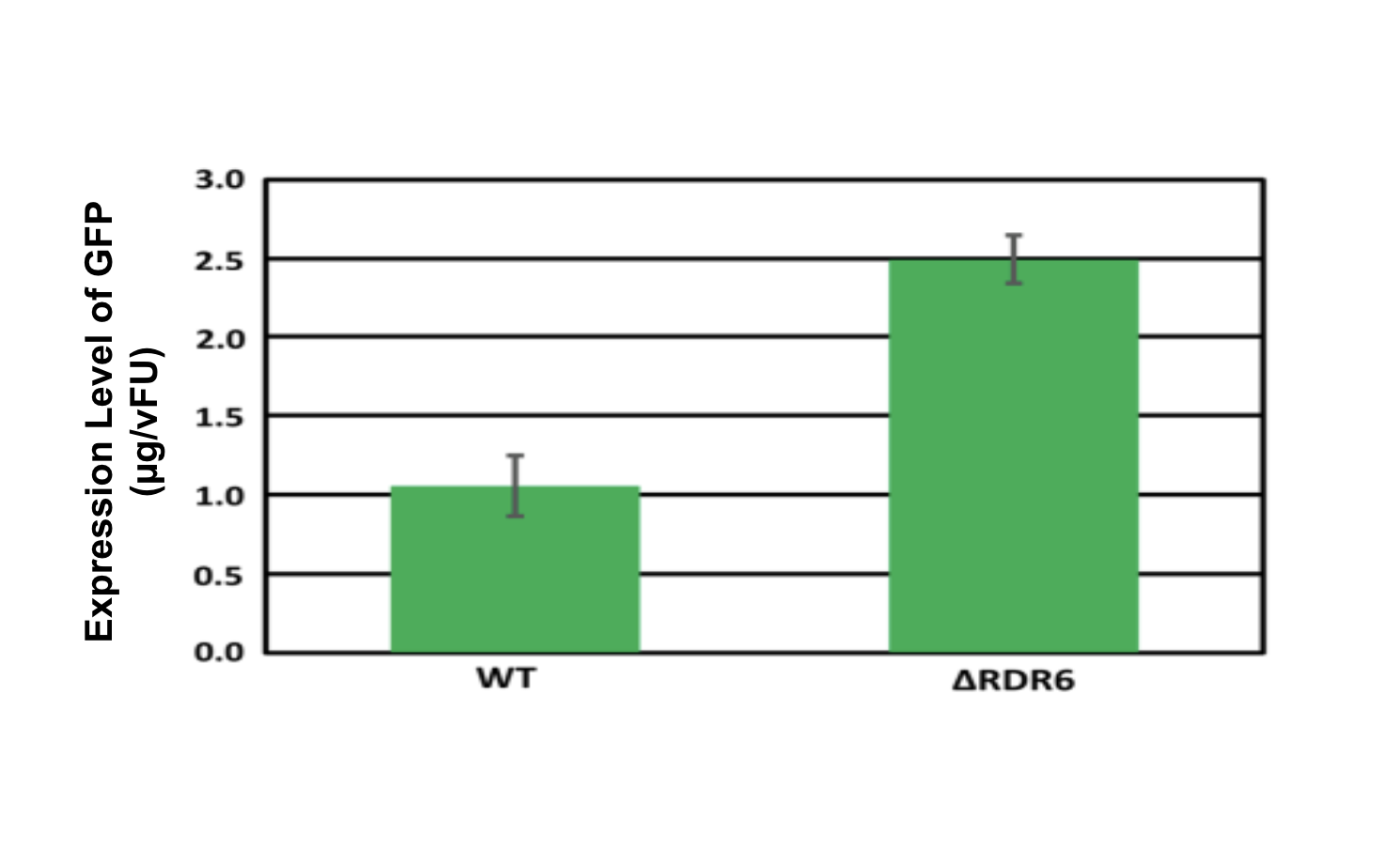 Like yeasts, E. coli and other microorganisms, plants have long been useful tools to produce recombinant proteins through genetic modifications. The goals of these modifications vary from producing therapeutic proteins to making proteins for industrial use. However, genetically altering organisms to produce a protein of interest is a time consuming and labor intensive process, but one well worth the effort. Researchers are constantly searching for ways to improve protein production yields and efficiency.

Figure 1: GFP was transiently expressed using the 35S promoter of the caulifower mosaic virus (CaMV) in the ΔRDR6 and WT plants.

Our company, Demeetra, validated the activity of Cas-CLOVER in plants by targeted inactivation of the RDR6 gene in tobacco. We achieved a knockout efficiency of at least 18% for our first target which is significant for tobacco. To learn more about this research, check out our poster presentation presented at this year’s virtual Plant Biology Worldwide Summit.

Edits such as knocking out the RDR6 gene may be valuable, as they can result in more robust recombinant protein production for rapid and scalable therapeutic manufacturing. In fact, the vaccine for the Ebola outbreak of 2014 was produced in transgenic tobacco, showing the value of these genetic editing tools in agriculture.

Novel gene editing proteins such as CRISPR-Cas9, transcription activator-like effector nucleases (TALEN), and zinc-finger nucleases (ZFN) target specific genes in a deliberate manner. This is compared to previous tools that randomly insert, delete, or cause frameshift mutations in the sequence being edited, which can dramatically alter gene function.

Cas-CLOVER has been validated to have little to no off-targets due to its dimeric nature. The Cas-CLOVER gene editing system shown in Figure 2 utilizes a catalytically inactive Cas9 protein fused to the Clo51 nucleus domain, which work as monomers recruited by a pair of guide RNAs (gRNA) to introduce targeted mutations. When both subunits are properly recruited to the target-site, dimerization and activation of the Clo51 nucleus domain occurs, leading to targeted gene disruptions.

The growing global population increases the threat of climate change and global pandemics, putting excess pressure on our food and medicine supply chains. Genetic modifications of plants and microbes could be the answer to more productive and resilient agricultural and healthcare supply systems. Traditional crop breeding techniques are blunt, time-consuming instruments compared to the speed and precision of today’s molecular tools.

Next generation CRISPR-Cas technologies like Cas-CLOVER allow for scarless gene editing, meaning no heterologous genes are left in the plant genome producing a non-GMO crop. Additionally, Cas-CLOVER has not only been validated in plants via deletion of RDR6 in tobacco, but also in yeast and CHO cells. The Cas-CLOVER system is therefore not only precise, but robust and adaptable, easily used across model systems to help researchers advance their work.