The goal of making combustible cigarettes less addictive by removing or significantly lowering their nicotine content to minimally or nonaddictive levels has long been on the U.S. Food and Drug Administration’s agenda. In July 2017, the agency announced a plan that became part of its multi-year roadmap for tobacco and nicotine regulation. When the FDA in late April 2021 revealed its intention to ban menthol cigarettes and cigars, it confirmed that the low-nicotine proposal was still under consideration.

For cigarette companies, a requirement to lower nicotine would present a cost-intensive and time-consuming challenge.

To date, no specific amount of nicotine has been identified as the threshold for addiction. In March 2018, the FDA issued an advance notice of proposed rulemaking to obtain information for consideration in developing a tobacco product standard to set the maximum nicotine level for cigarettes. In its 2015 Global Nicotine Reduction Strategy, the World Health Organization defined nonaddictive levels of nicotine as “likely to be equal or possibly less than 0.4 mg/g of dry cigarette tobacco filler.” To reach such levels, conventional tools to control deliveries, such as ventilated filters, will not suffice.

Getting nicotine out of tobacco is a tall order; key considerations are cost and the impact of the treatment on produce quality. Until recently, there were basically three methods available to produce very-low nicotine (VLN) cigarettes—chemical extraction, genetic modification and microwave-assisted extraction.

Using solvents, the chemical extraction method is similar to that used for removing caffeine from coffee beans. Because it is a batch process, it is not selective to nicotine only, however. During the de-nicotinization process, some flavorings are also eliminated, which is detrimental to the taste of the tobacco.

Another strategy involves the use of genetically modified (GM) tobacco plants. The GM variety is presently offered by only one company, 22nd Century Group. Through its subsidiaries, 22nd Century has been supplying the U.S. National Institute on Drug Abuse with VLN cigarettes for research financed by the FDA and other U.S. federal government agencies since 2011.

Now, a new nicotine-reduction technology has entered the scene. Demeetra AgBio, a biotech company headquartered in Lexington, Kentucky, USA, recently introduced its Cas-CLOVER technology with which it is currently designing gene-editing protocols specifically for the tobacco industry. Cas-CLOVER builds on the CRISPR-Cas9 gene-editing technique, which achieved worldwide fame in 2020 when Emmanuelle Charpentier and Jennifer Doudna received a Nobel Prize in Chemistry for its development. CRISPR-Cas9 is a molecular biological laboratory tool used to “edit” pieces of a living organism’s DNA. 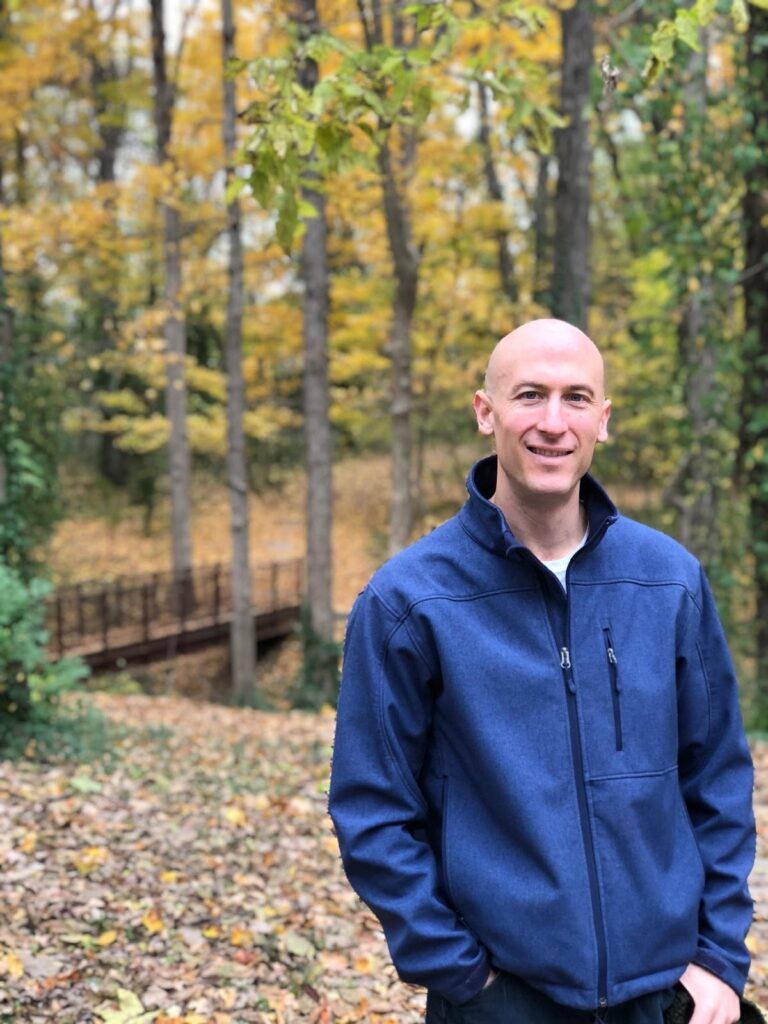 Based on a simplified version of the bacterial CRISPR-Cas9 antiviral system, it works like a pair of genetic scissors by using a specially designed RNA molecule to guide a Cas9 enzyme to a specific sequence of DNA. Cas9 then cuts the strands of DNA at that point and removes a small piece, causing a gap in the DNA at a desired location, allowing existing genes to be removed and/or new ones added in vivo.

The method is considered highly significant in biotechnology and medicine as it allows for the genomes to be edited in vivo with high precision, at low cost and with ease. The system can be used in the creation of new medicines, agricultural products and has potential to help treat inherited genetic diseases, such as cancer and AIDS.

The technique, however, has downsides: CRISPR-Cas9 also introduces abundant off-target mutations, thus increasing the need for “backcrossing” the crop. What’s more, the opportunity for commercialization of products that use the technology is restricted by intellectual property rights. The current owner, the Broad Institute of MIT and Harvard, prohibits the technology from being used for applications that involve the commercialization of tobacco products.

This is where Cas-CLOVER comes in. Because Demeetra has separate and issued IP for Cas-CLOVER, users need only a single license from the company to obtain commercial freedom to operate, according to Demeetra CEO Jack Crawford. What’s more, off-target mutations are nearly undetectable with Cas-CLOVER.

“This matters for several reasons, the first of which is time,” says Crawford. “Since there are little to no off-targets with Cas-CLOVER, it requires less back-crossing to remove those off-targets. For example, CRISPR/Cas9 or chemical mutagenesis might require six to 12 generations of back-crossing to remove most of the unintended mutations. This takes years to decades, and many undesirable traits are never removed.”

The second reason involves traits, according to Crawford. “Since unintended mutations are not a concern with Cas-CLOVER, one knows that a trait of interest, such as reduced nicotine, is related to the gene you targeted and will not be lost during backcrossing or breeding,” he says.

Like a pair of molecular scissors, Cas-CLOVER can cut and effectively turn off or “knock out” any gene in any organism, Crawford points out. The system can also be used to knock in genes at a specific location. “The traits that can be generated are virtually limitless,” he says. “By targeting specific genes, nicotine can be increased for extraction and use in nicotine-replacement therapy or decreased, and the carcinogen levels can also be reduced. Additionally, disease and drought-resistant crops can be generated in this way.”

If used for the creation of VLN tobacco, Cas-CLOVER would differ from competing processes in several ways, according to Crawford.

“Cas-CLOVER can rapidly and reliably target genes for nicotine reduction in a step-wise or all at once manner,” he says. “This can be done in many varieties at the same time, enhancing product quality and availability.

Cas-CLOVER-edited plants will not be considered GM and would not require regulatory clearance on the level of introducing new GM varieties. This targeted approach could result in reduced nicotine without reducing yields, and downstream processing would be simpler, all contributing to lower costs.” 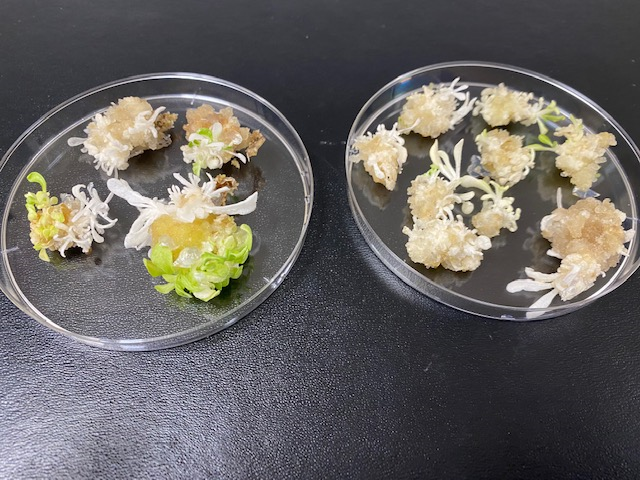 Cas-CLOVER targeted tobacco shoots with knockout mutations for the phytoene desaturase gene, which results in a visually pale and white phenotype. 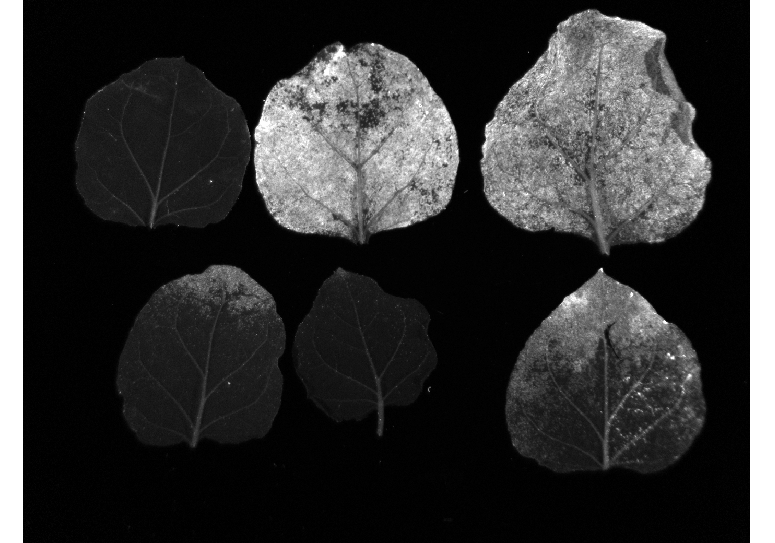 In the U.S., Cas-CLOVER and CRISPR-Cas9 are not considered GM because the intended mutation, which is typically a deletion, could have occurred by breeding or in nature, and there are no other changes or nonplant gene sequences “transgenes” in the genome. “The traditional GM crops contain transgenes from exogenous organisms that are inserted permanently into the genome of the crop. These transgenes typically include antibiotic selection markers, antisense or RNA interference genes. In fact, targeted gene-editing technologies are a huge improvement over transgenic GMs and chemical mutagenesis in terms of safety.”

Located in the heart of tobacco country, Demeetra is one of several companies in the region that use tobacco as a universal plant research model. The company has validated and optimized the Cas-CLOVER technology in commercial varieties of tobacco for high-efficiency gene-editing and intends to license it to tobacco companies for multiple applications. The technology is currently being applied in a laboratory setting and will eventually move to field trials in commercial tobacco strains, such as burley.

And its potential could extend beyond the lowering of nicotine levels. Demeetra is working on using its technology to modify carcinogen levels to reduce the cancer risk from smoking combustible cigarettes for various ethnic groups. “The bulk of the carcinogens are produced when the leaf is cured and nicotine is converted to tobacco-specific-nitrosamines (TSNAs), which are known carcinogens,” Crawford explains. “By using Cas-CLOVER, we can specifically turn off the genes responsible for the conversion of nicotine to TSNAs. This would result in a far safer combustible cigarette for all ethnic groups, and a by-product is increased nicotine.

“[Different] ethnic groups metabolize TSNAs differently, which is thought to contribute to cancer disparities. These improvements with Cas-CLOVER may help close that disparity gap. The tobacco industry has generated low converter lines by conventional breeding and chemical mutagenesis. However, since this is not a targeted gene-editing approach, other undesirable traits come along with the low converters, such as low yield. Conventional breeding takes many years. Since most cigarettes contain multiple varieties of tobacco to enhance taste and other attributes, a rapid Cas-CLOVER approach in many varieties could produce low converters without sacrificing cigarette quality and tobacco leaf yield.”

Crawford sees similar potential for his method in the treatment of cannabis plants. “Biopesticides could be produced in the plant or manufactured in an exogenous system, such as yeast, and then applied to crops. Cannabis is a blank canvas of opportunities and challenges. Once gene-editing conditions are worked out in cannabis, Cas-CLOVER would be best utilized to modify bioproduction of specific cannabinoids, such as CBD and THC, but also rare cannabinoids.”

Currently, Demeetra is exploring use of its gene-editing technology to uncover the therapeutic value of tobacco plants. Crawford says his company had generated Nicotiana benthamiana-edited plants, which is the host variety for manufacturing biologic therapies. “There are many improvements that could be made to this manufacturing system with Cas-CLOVER, such as enhancing the quality of the biologic therapeutic produced in tobacco and removing components that complicate downstream processing.”

Demeetra is also working to generate tobacco plants with advanced traits for biotherapeutic production. “This is not only applicable to vaccines but any biotherapeutic, such as an antibody,” says Crawford. “A primary example is by knocking out the plant post-translational modifications. When a biologic is produced, the plant adds certain sugars and other molecules to the protein just as it would with naturally produced proteins. Since these protein side groups are not the same as human, it causes undesired immune response, which can limit the efficacy of the product. With Cas-CLOVER, we can eliminate these and other genes to improve tobacco as a biotherapeutic manufacturing platform.”

Reach out to us and learn more about our gene editing technology and licensing services we offer.