Recently, the Biden Administration is considering a policy that requires all tobacco companies to effectively lower nicotine levels in combustible cigarette products made from tobacco leaves sold in the United States to levels that wouldn’t be considered addictive to their users. A nicotine-reduction policy sounds like a great policy for public health advocates, but it’s not an easy endeavor without the development of new tobacco plant varieties with reduced nicotine phenotypes. These new reduced nicotine varieties could be most efficiently and safely generated by gene editing platforms. However, the inventors of a popular platform CRISPR/Cas9 have banned its use for tobacco product development, enter Cas-CLOVER.

When reducing the levels of nicotine and subsequent carcinogens, gene editing technology has multiple solutions to this issue that we would like to discuss in this article. Demeetra is seeking collaborations for clean editing in tobacco which will result in a stepwise reduction of nicotine rapidly in unlimited varieties to meet the goals of this new policy.

Nicotine itself is not considered harmful and has some health benefits. Here, scientists even compared a daily dose of nicotine to the positive effects of caffeine. The future of the tobacco industry will likely be focused on reduced harm, smoke free products such as nicotine gum. Demeetra’s gene editing platform can also enable increased nicotine production in tobacco or heterologous plants or other bioprocess systems including yeast, which would be followed by nicotine isolation for product development. We will comment on these opportunities in a future post.

Strategizing The Impact Of These Proposed Tobacco Regulations

Let’s take a look at a study by Benowitz et al.1 for strategizing these potential upcoming regulations. According to Benowitz, the average cigarette contains approximately 1.5 to 2.5 percent nicotine, which translates to about 8 to 9 mg nicotine total. In order for these regulations to work, the nicotine levels would need to be effectively reduced to 0.4 to 0.5 mg of nicotine per cigarette, and therefore the nicotine level would need to be 22.5-fold lower, or about 0.05-0.1% nicotine total. This seems like quite a large reduction, but there are many candidate gene targets and it is nearly achievable in one published example through a triple KO strategy that we’ll detail below. Another point worth considering is that the proposed regulation strategy also suggests a gradual reduction in nicotine over 10-15 years, giving research labs ample time to develop tobacco varieties with lower nicotine in a stepwise fashion that may involve only single or double knockouts at first.

It is believed that an absolute limit of 0.4 to 0.5 mg of nicotine per cigarette would be low enough levels to prevent or limit the development of addiction. As found in this study, the potential drawback of this “gradual reduction” strategy is something called overcompensation, in which the users would inhale more smoke from the low-nicotine varieties in order to compensate for the loss in overall nicotine. But before we can even begin more studies of this nature, we will need to have all of these proposed low-nicotine varieties already in place and on the market to begin with. Let’s now take a look at how gene editing can help with this development enormously.

A gradual reduction in the nicotine levels could be introduced by starting with a single knockout, and then moving to a double knockout, as described in the study below. However, there could be a large amount of other targets not used in the study below that would be better in terms of decreasing yield. In a study by Dewey et al. 2 they found that the inactivation of tobacco genes such as the Berberine Bridge Like (BBL) gene family could be a viable strategy for producing new tobacco cultivars with ultra-low leaf nicotine levels. This is a review of that work and how Cas-CLOVER could be implemented in reducing nicotine as an example only and we do not suggest the use of these published targets for any given product.

The research team was able to introduce deleterious mutations generated via ethyl methanesulfonate (EMS) treatment. EMS is a non-specific mutagen which unlike Cas-CLOVER can’t be targeted to a specific gene or locus. Meaning, EMS creates mutations all over the tobacco genome and thousands of plants need to be screened for the desired mutants. Once identified, the mutants need to be bred together and then backcrossed potentially dozens of times to remove the thousands of unwanted off-target mutations. Hats off to the groups that take this route but obviously this approach is very inefficient taking decades. Considering most leaf tobacco cigarettes are composed of multiple tobacco varieties for flavor and quality, Cas-CLOVER which has been shown to make effective targeted knockouts in tobacco in just months would be the ideal technology to decrease nicotine without sacrificing on product quality.

Back to the main goal of the research example, to establish isogenic versions of flue-cured and burley tobacco varieties that differed for the presence/absence of deleterious mutations in each of the 6 most highly expressed BBL genes. Another goal was to evaluate these varieties for any differences in the alkaloid profiles, and any corresponding changes in cured leaf quality and yield.

Looking at the data, the cured leaf quality of the low nicotine mutant genotype K326 was significantly better than that for the alternative LAFC53. Significant reductions in all alkaloids (P < 0.05) were observed for bbl-a/bbl-a bbl-b/bbl-b bbl-c/bbl-c (triple knockout) individuals, especially individuals also carrying the recessive alleles at the Nic1 locus, or the Nic1 and Nic2 loci. Overall, they found that Nic1 single recessive results in significant reduction in nicotine. Now let’s take a look at how Demeetra’s Cas-CLOVER platform could be used instead, making for a more robust and efficient option for research teams.

We believe that a stepwise reduction in nicotine could be achieved with any variety of targets similar to the BBL mutant examples. The first steps could be achieved with single or double mutants with or without the recessive nic1 or nic2 alleles followed by a triple or more knockout of nicotine reduction targets as exemplified in the BBL gene study. (see figure below). 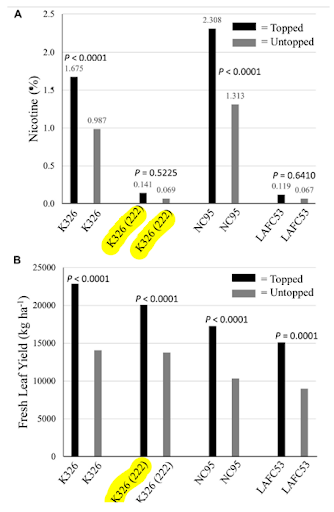 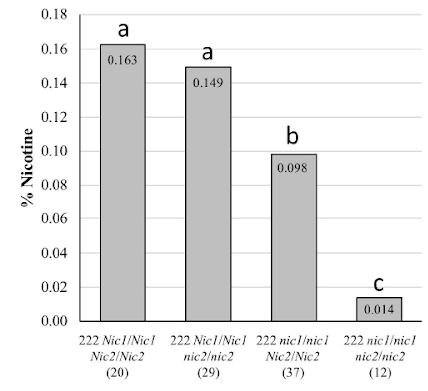 As mentioned in this study, the genes highlighted in the figure below are the only mutations needed to get ultra-reduced nicotine. They were originally made by EMS , and the truncations are way downstream in the genes. Our full KO strains with Cas-CLOVER might result in an even greater reduction in nicotine, and thus may have higher yields of cured leaf because we might not need to make a full triple KO. 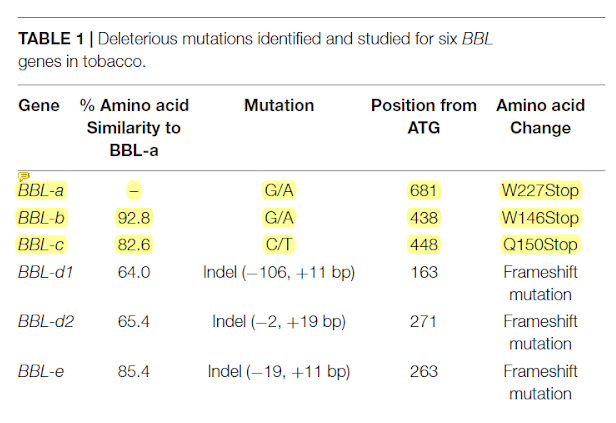 Since the regulations suggest a stepwise reduction in cigarettes’ potency over a period of many years, there will be plenty of time for creating effectively low-nicotine varieties. As shown in the figure below, we would suggest starting with a double knockout for BBL-a and BBL-b, shown as K326 (220). Then move to a triple knockout for BBL-a, BBL-b, BBL-c as shown as K326 (222). 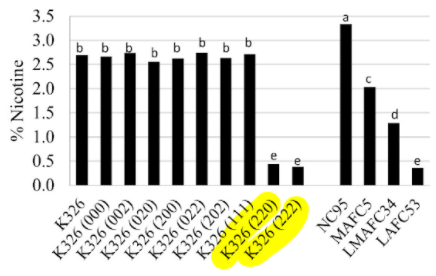 Afterwards, it is suggested to breed with nic1/nic1. Even though these yields would be reduced significantly, these are made into potentially unacceptable levels in a “non-topping” regimen (see figure below). 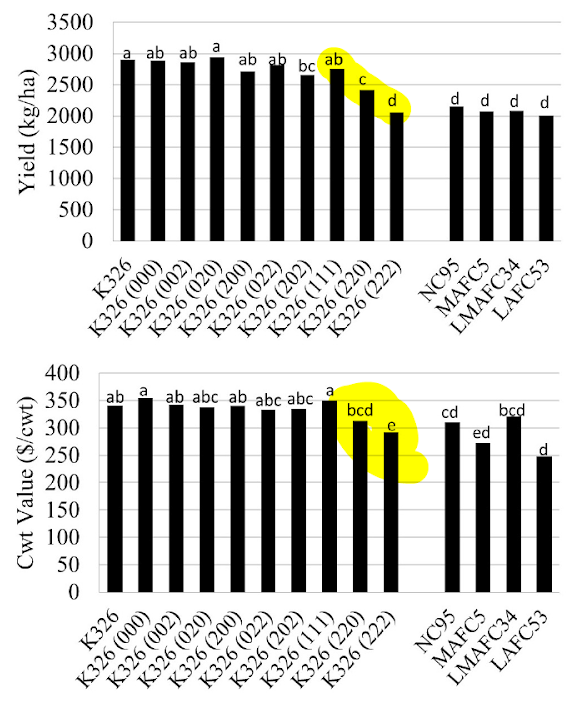 If you’re interested in learning more about how Cas-CLOVER could help with your tobacco projects, take a look at our previous post on tobacco editing with Cas-CLOVER. We are open for services to modify any tobacco strain or variety with our technology. We have everything for your gene editing needs, including flexible front or back-loaded service terms and licensing options. If you’d like to discuss licensing and forming a partnership, fill out the form here and we’ll get back to you right away.