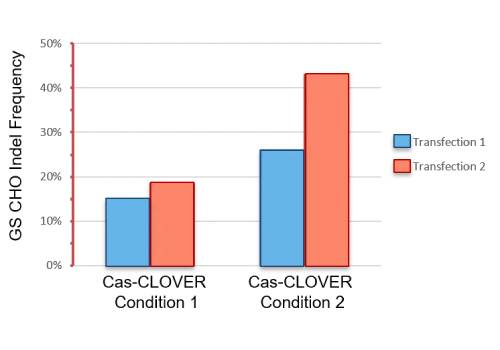 Similar indel frequencies can be achieved as compared with CRISPR

Demeetra is offering evaluation licenses for Cas-CLOVER and GS CHO knockouts separately or together, which can convert into commercial licenses with very accessible terms, including single-time payments with no royalties

Chinese Hamster Ovarian (CHO) cells are emerging as a robust platform for bioprocessing serving both early and late stage biotherapeutic drug supply. However, these cells, and other hosts (i.e. HEK293), can be optimized for even greater potential through advanced gene editing. For example, when the endogenous glutamine synthetase (GS) gene is knocked out in CHO cells, a 6-fold increase in high producing cell lines is achieved (1). In another study, CHO with ANXA2 and CTSD gene knockouts were introduced in order to eliminate CHO host cell proteins which complicate downstream processing and can contribute to immunogenicity (2).

Site-specific nucleases such as ZFNs, CRISPR and now Cas-CLOVER bind to the target sequence and generate insertions and deletions “indels” resulting in null mutations “knockouts” or exogenous “knock-ins” when supplied with a donor vector. If the indel frequency is determined to be high enough by sequencing, only a small set of cells need to be screened and cloned in order to identify edited cell lines, greatly increasing efficiency and decreasing timelines.

CRISPR/Cas9 technology has been utilized successfully in many cell lines. However, CRISPR suffers from two flaws, off-target mutagenesis, which we will discuss in more detail (3,4). In addition, intellectual property (IP) entanglements or lack of clear commercial freedom to operate have limited its use commercially.

Demeetra AgBio is a new biotech company stemming from the gene editing platforms of Transposagen which is best known for its commercialization of the piggyBac® transposon. piggyBac is now being utilized in drug discovery & development by Hera BioLabs, cell therapy clinical trials by Poseida Therapeutics and for human therapeutic cell biomanufacturing by Lonza. Demeetra is introducing the Cas-CLOVER technology for commercial bioprocessing as well as newly edited GS knockout CHO cell lines. Cas-CLOVER differs from CRISPR/Cas9 in that it is a dimeric nuclease system lacking detectable off-target mutagenesis (5) and licensing is straight forward with issued IP and clear commercial freedom to operate.

Dimeric Cas-CLOVER uses two guide RNAs to target sequences of two “half-sites,” and creates indels by cutting at the spacer sequences between the two half-sites with the proprietary dimeric Clo51 nuclease. The key to specificity and ease of design for Cas-CLOVER is the relative stringency of the dimeric Clo51 nuclease, combined with a little wiggle room in the spacer region. Data was presented at a recent gene editing conference demonstrating that Cas-CLOVER is strictly controlled by on-site target binding of both gRNAs within a specific spacer length, ideally 16-30 bases (5). Yet that spacer length range enables enough flexibility to easily design Cas-CLOVER targets sites in most genes of interest.

The specificity of Cas-CLOVER enables multiple rounds of targeting at one locus to increase indel frequency without introducing the risk of unwanted off-target mutations. Here we report indel frequencies ranging from 15% to 43% at the CHO GS locus for one and two rounds of targeting respectively. These on-target frequencies in CHO cells are higher than reported for ZFN and comparable to CRISPR/Cas9.

Below are examples of indels created by Cas-CLOVER when targeting the GS gene in CHO cells. The indels are within an exon of the GS gene and are expected to create a full knockout phenotype. Demeetra will be publishing a following up article on the characterization of the knockout clone CHO cell lines.

In contrast to Cas-CLOVER, the monomeric CRISPR/Cas9 nuclease system is directed to target sites with a single gRNA as depicted below.