As cell line development bioprocessing turns from traditional random plasmid integration to targeted knock-ins for maximizing yield and stability, it is important to choose the right gene editing tools. The RNA-guided Cas9 nuclease from Streptococcus pyogenes (SpCas9), which is the most commonly used enzyme in genome-editing applications, can yield significant levels of off-target activity, with reported off-target cutting as high as 13%. Multiplex editing with SpCas9 for cell line engineering can also lead to high rates of translocations, up to 4% for individual translocations or rearrangements and up to 5% cumulatively.1

A recent study published in Molecular Therapy Nucleic Acids saw the authors at Poseida Therapeutics deploy the dual RNA-guided dimeric endonuclease, Cas-CLOVER as an alternative to CRISPR/Cas9. Demeetra and Poseida both use Cas-CLOVER technology in different fields of use, with Demeetra having the exclusive rights to this proven alternative to CRISPR/Cas9 for bioprocessing, agriculture and synthetic biotechnology. Let’s take a closer look at the targeted knock-in data in this study with Cas-CLOVER.

At most loci, Cas-CLOVER’s indel – as well as knock-in – efficiency is equal to or greater than that of Cas9, as demonstrated in the below example for B2M.

Figure 1: Quantification of indel (left) and HDR rates (right) at the B2M locus.

At HBB, knockin efficiency was higher using Cas-CLOVER, but the difference was probably not due to differential efficiency of target cleavage, as gauged by Cas-CLOVER’s lower indel generation (see image below). Rather, the higher efficiency was likely a result of the larger deletions, with overhangs, that are characteristic of Cas-CLOVER. Cas9 indels generally result in small 1-3 bp blunt-ended cuts. 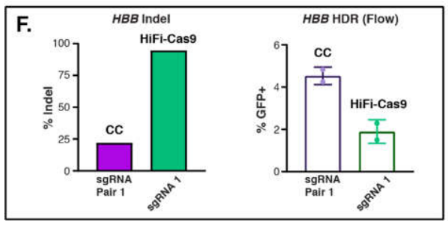 Figure 2: Quantification of indel (left) and HDR rates (right) at the HBB locus. Flow for HDR measurement at the HBB locus was performed 14 days post-nucleofection to ensure episomal GFP expression from the donor plasmid had decreased below the detection limit.

After Cas-CLOVER editing, potential off-target sites were queried for the presence of indel mutations. Indel frequency at off-target sites did not occur at a statistically significant level above background. The team concluded that, within primary T cells from multiple donors, the Cas-CLOVER platform performs as well as any other targeted nuclease, but with much lower off-target activity. Notably, Cas-CLOVER yields efficient multiplexed gene editing.

Induced pluripotent stem cells (iPSCs) are considered an effective cell source for cultured meat production. iPS and other cell lines are being used more and more in therapeutic bioprocessing and in cultured meats, and with a wave of new research to improve its robustness and effectiveness at industrial scale, Demeetra’s Cas-CLOVER gene editing platform is here to help lead the way.

To learn more about Cas-CLOVER, piggyBac, and how Demeetra can help accelerate your gene editing research with our toolkit, click here. We have everything for your gene editing needs, including flexible front or back-loaded service terms and licensing options.