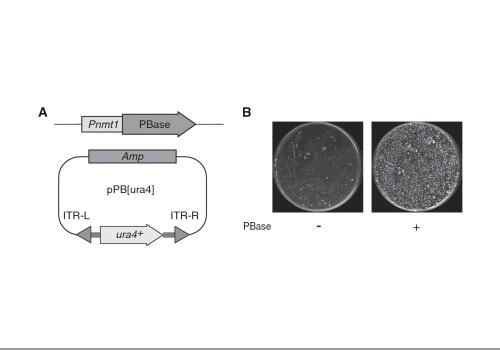 CRISPR may get all the attention for being able to cut DNA in a directed way, but how do researchers insert or remove genes or what if the gene(s) that produce phenotypes of interest are not known?

The piggyBac (PB) system can be used for the introduction of genes into many different organisms. These genes are introduced into host DNA through a transposase/transposon system, and can either insert or remove genes of all different sizes.

On top of that, the PB transposase tool has been shown to edit the genetic material in a scarless manner, leaving no unintended effects.

How Does piggyBac Work?

PB is a TTAA-specific transposon, meaning it will only bind to a genetic sequence that has an open reading frame starting with a 4bp “TTAA” sequence. The PB mechanism was originally discovered in Trichoplusia ni, or the cabbage looper moth, but has been used as a mutagenesis tool in many other eukaryotic organisms, including CHO cells, plants and yeast. As a tool for insertional mutagenesis, PB is able to incorporate mutations into an organism’s genome, allowing for phenotype screening and modification of difficult to edit cells and organisms, especially if homologous recombination (HR) is not efficient.

Schizosaccharomyces pombe and its significance as a model organism

The species of fission yeast, Schizosaccharomyces pombe, has an incredibly simple genome, but unlike S. cerevisiae, it does not have robust genetic tools. Because of this, S. pombe is a model that scientists have chosen to integrate with the PB transposase technology.

By using the PB transposition tool in S. pombe, researchers were able to perform genetic screens to identify the phenotype, or physical changes, caused by the mutations.

Mutations can be intentionally introduced into otherwise normal S. pombe cells to determine which particular mutation, or combination of mutations, are causing certain phenotypes.

Because chemical mutagens aren’t very targeted, they can cause random mutations in the host’s DNA, making this method difficult. In addition, it is common for more than one mutation to occur, which leaves determining the mutation of interest for the resulting phenotype challenging.

Another method of introducing mutations is through insertional mutagenesis. Through this method, it’s possible to insert only the mutation of interest. This gives a clear advantage over chemical mutagenesis by making it easy to find which mutation is responsible for the change in phenotype. However, when achieved through PCR, insertional mutagenesis could lead to multiple insertions of the same DNA fragment. This makes it difficult to find the site of integration.

Compared to the other methods, transposons allow mutations to be easily identified and located. Interestingly, S. pombe already has a retrotransposon native to its system known as Tf1. This transposon was tested for creating directed mutations, but there was a strong insertional bias against open reading frames (ORFs), meaning the transposon didn’t go where the researchers wanted it to.

Why Use piggyBac For Mutagenesis And Genetic Screens?

In the case of Demeetra AgBio and our piggyBac transposon system, there are clear advantages when using the tool for genetic screens in yeast.

The mutations created by PB are easily identified and located. Unlike in Tf1, the native S. pombe transposon, PB experiences little insertional bias. Typically, TTAA is the target sequence for PB, but it was found that it has little bias against ORFs, and has been found to bind to other similar sequences as well.

In addition to this, PB technology also has the ability to take out the same sequence that it introduced without leaving any genetic material behind! This ‘footprint-free’ feature means PB could take out the same gene it put in and the phenotype can be observed. If the S. pombe phenotype returns to the same activity before any mutations were introduced, the genes involved can be definitively confirmed.

The piggyBac transposase/transposon system is just one of the “footprint-free” genetic engineering technologies offered by Demeetra.

Another one of Demeetra’s gene editing systems is Cas-CLOVER, which is able to introduce targeted double-stranded breaks in genomic DNA. Cas-CLOVER utilizes the Cas9 protein fused to a Clo51 endonuclease to make “molecular scissors.” First, the mutated Cas9 protein fuses to the DNA, which then enables the Clo51 protein to become dimerized and create a double stranded break.

To learn more about piggyBac and how Demeetra can help accelerate your gene editing research with our toolkit, click here. If you’d like to discuss licensing and forming a partnership, fill out the form and we’ll get back to you right away.